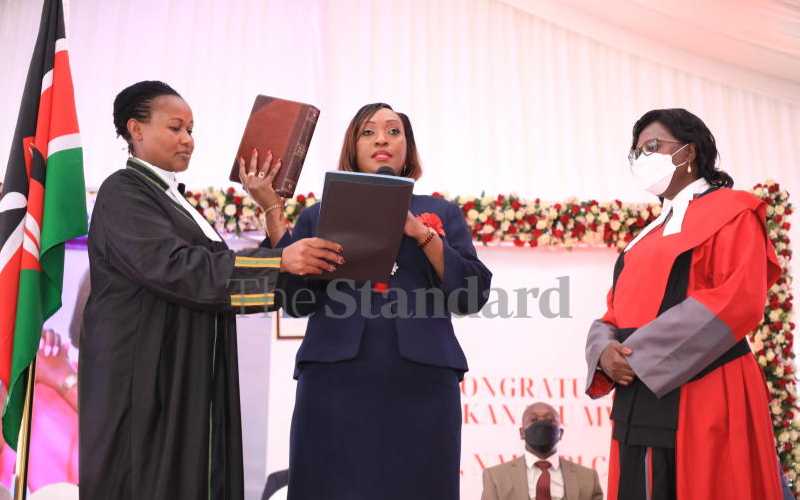 Governor Ann Kananu yesterday launched a four-point Nairobi Economic Stimulus Programme to revitalise the capital’s economy as she was sworn in.

The former security supervisor at the Kenya Airports Authority (KAA), took over reins of power at City Hall in a colourful event graced by politicians and technocrats.

Judge Lilian Mutende administered the oath of office to Kananu at 10.49am, ending a long search for Nairobi’s substantive governor following the impeachment of Mike Sonko last year.

She would later ride the historic black Rolls Royce – the official Governor’s vehicle- to her new office where she was handed the instruments of power, right after inspecting a guard of honour and signing the visitors’ book.

To steer the county back to prosperity for the ten months she will be in office, Kananu will bank on an economic stimulus programme to be implemented before the August 2022 General Election.

“My tenure comes at a time when the city is reeling from the social and economic impact of the Covid-19 pandemic.

“For this reason, during my tenure in office, I have focused on cushioning Nairobi residents and businesses from the impact of the pandemic,” she said.

She seeks to create jobs by revitalising the capital’s 24-hour economy, with a promise to launch within the next 30 days a Post-Covid Recovery Plan with a focus on greater improvements in security, local policing, lighting and sanitation.

The former Disaster and Management chief officer at City Hall is also keen on improving healthcare for children through better nutrition, free milk for the approximately 6,450 children in the ECDE centres in the 17 sub-counties.

The Kananu administration will also install 850 water tanks (10 tanks per ward) and sink boreholes in the informal settlements to ensure improved water and sanitation.

“My administration will continue to use our strategic position in the country to continue being the regional hub of the many visitors transiting, safe home to international agencies and businesses and the key contributor of income to the country’s GDP,” said Kananu.

A full in-tray awaits her.

The governor’s maiden task in office will be to nominate a deputy given that the position is now vacant.

Prior to her being appointed as a Deputy Governor, the position had been vacant following the resignation of Polycarp Igathe in 2018.

She is expected to communicate her preferred candidate to the county assembly which will then vet and approve the candidate.

Kananu is also expected to re-constitute her Cabinet given that the current one was appointed by the former Governor Mike Sonko.

According to the County Governments Act, if a vacancy arises in the office of the governor, members of the county executive committee cease to hold office.

Consequently, the tenure of the nine Nairobi executives legally came to an end following the ouster of Sonko in December 2020.

As incoming Governor, Kananu may, however, choose to retain the officers or send them packing.

Also on the table is the issue of whether or not to extend the term of the Nairobi Metropolitan Services (NMS) which expires in March 2022.

NMS was operationalised in March 2020 following a deed of transfer agreement between City Hall and the national government.

It took charge of four county functions of transport, health, public works and utilities, and ancillary services, county planning, and development for a period of 24 months.