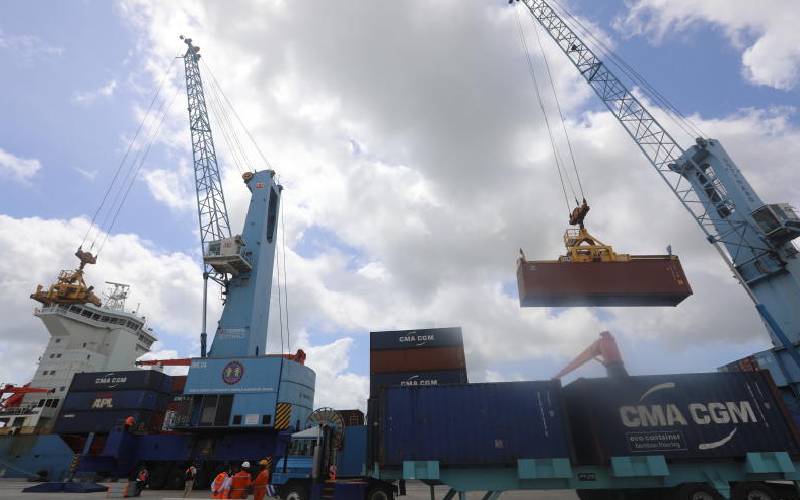 Six months after its first berth was opened by President Uhuru Kenyatta, Lamu Port is struggling to grow the transhipment business.

Data from the Kenya Ports Authority (KPA) shows only eight ships have docked at the facility since May 20 when the first berth was launched.

At the time, KPA announced incentives that it hoped would draw transhipment business from the Port of Djibouti and Durban in South Africa.

The agency aimed to position Lamu as a major centre of transhipment business like the Port of Salalah in Oman.

Among the incentives KPA mooted was a 50 per cent cut on tariffs for ships docking at the port in comparison with the rates charged at the Port of Mombasa.

KPA also halved the cost of pilotage, tug services and mooring for the vessels calling on the port.

The ports agency went ahead to lower charges for storage of transhipment vehicles with the first 30 days attracting no charge at all. However, after the 30-day grace period, shippers are to pay Sh2,160 and Sh4,320 for a 20 and 40-foot container.

KPA, in partnership with the Kenya Revenue Authority, extended the duration of the entry of cargo from 21 days to 30 days and the transit period increased from 30 to 60 days.

The promotional tariffs were to remain valid for a period of one year starting May to May 20 next year.

KPA officials, however, remain optimistic. In a statement released yesterday, the agency said the facility is set to make a major leap forward following the completion of the other two berths.

The latest report from KPA indicates that the eight ships the port has handled have a total of 1,424 twenty-foot equipment units.

When it was launched, the port received MV Cap Carmel and MV Seago Bremer Haven.

These were followed by MV Spirit of Dubai on July 19, MV Seago Pireaus on August 22 and MV Amu 1 on August 30.

Hajj Masemo, KPA Public Relations Officer, stressed that despite the challenges brewed by the Covid-19, the port handled the first eight ships excellently.

“The port was launched at a time when global economies are struggling to shed off the effects of Covid-19. The pandemic hit hard the shipping sector globally,” said Mr Masemo.

According to the KPA official, the port is strategically placed. With its deep waters, it is able o accommodate some of the world’s biggest vessels for transhipment business linking East Africa to Europe and Asia.

“We believe with the vigorous marketing efforts that we have put in place and with support of our stakeholders, operations will improve as the world continues to trample upon the Covid-19 recovery path,” Masemo said.

In 2012, former President Mwai Kibaki was joined by South Sudan President Salva Kiir, the then Ethiopian Prime Minister the late Meles Zenawi and Uganda President Yoweri Museveni to lay the foundation stone of the port.

Maritime experts say the project, which is part of the Lamu Port South Sudan Ethiopia Transport Corridor (Lapsset), will propel Kenya to be the next transport and commercial hub for Africa.

The port was conceptualised in 1972, but was shelved for 49 years after maritime consultants raised questions about its feasibility.

The strategic location of Lamu Port is expected to place it in a position to compete with major ports in the region such as Durban in South Africa.