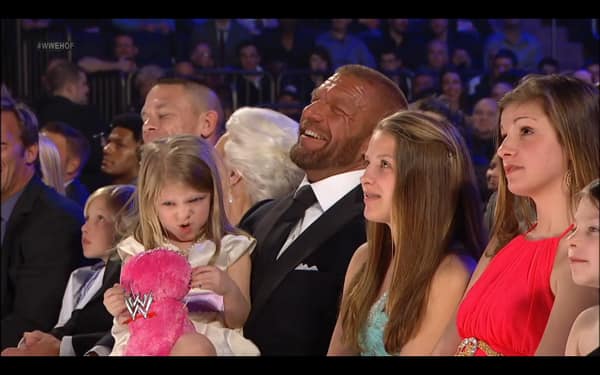 Most if not all entrepreneurs start-up ventures all in a bid to build their dynasties and legacies and hand them down to their children and families.

Be it a corporate venture or even sports, many have proven their offspring could take over from them and continue their legacies.

This, legendary wrestler Triple H and his family was brought to life recently after his oldest daughter joined her family’s line of business.

The aforementioned was confirmed by Triple H’s wife Stephanie McMahon who disclosed that her eldest daughter has actually started training to become a WWE Superstar.

Speaking during an interview with TalkSPORT, Stephanie McMahon stated that her 15-year-old daughter whom she shares with Triple H has started her journey in wrestling already.

“We have three daughters, Triple H and I do, they are 15, 13 and 11. Our oldest said when she was eight years old ‘Momma, I don’t want your job. Daddy, I don’t want your job. I want Pop’s (Vince McMahon) job. So, just like her grandfather, she wants to be the boss so we’ll see what happens with my oldest daughter who has already started training in the ring. My youngest daughter is also very interested but she is all about personality (laughs). Oh my goodness, I can’t wait to see what she is going to do.” Stephanie McMahon said.

The news excited most wrestling fans who took to social media to express how much they cannot wait to see Triple H’s daughter on stage.

Triple H’s daughter, 15, and who goes by Aurora Rose Levesque may not appear on WWE TV for quite some time, but most wrestling fans disclosed her move to follow in her family’s footsteps is rather exciting.

The latest development comes barely days after Triple H, the former WWE Champion was spotted for the first time back at work since his “cardiac event” in September and subsequent surgery.

Akothee’s message to Rue as she graduates, Jalang’o lectures Sh18K boy on Camera & other stories on #PulseUhondoMtaani

My Husband Is Not a Dog: Nollywood Star Tells Ladies Who...