DJ Krowbar Celebrates Mum with Touching Post on Her Birthday: “She Used to Pray for Me Daily” 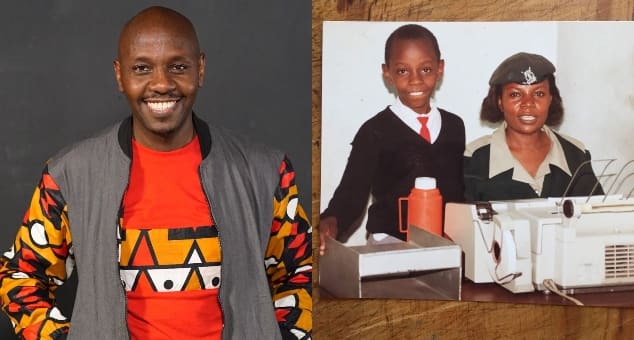 Revered gospel music mix master DJ Krowbar has celebrated his mother in the best way possible as she turned a year older.

Krowbar, on Thursday, November 25, took to social media to mark his mother’s birthday in a special way.

The entertainer posted an old photo of himself standing at her mother’s work place and shared about how she made him believe in prayers.

According to DJ Krowbar, his mother used to lay her hands on him and manifest prayers everytime she left the house for work.

The entertainer insisted that the practise has continued to date and that his mother still do the same whenever they visit her or she visits them in the city.

While celebrating the mum on her birthday, Krowbar lauded her for being a spiritual monarch to him and his entire family.

“Today is my mom’s birthday. I decided to post this TBT of me passing by my mom’s office when I was around 10yrs old (Kenya Prisons Radio Room).

Short Story: My mom use to pray for me every day of my life. Literary speaking. She would lay her hands on me and speak a word into my life. Up to today when we visit her or she visits she still says a prayer most of the time laying hands on me.

I used to think this was normal cause when God gave us our own kids I did the same without thinking. Daily I lay hands on my kids. (Kumbe si si kawaida)

This is to celebrate the spiritual monarch that she is to me and my generations. I LOVE YOU MOM.

His fans joined him in wishing his mother a happy one on the comments section of his post.

This comes barely months after Krowbar’s wife Wanjiru Karumba disclosed they could not afford professional photography when he proposed to her.

A earlier reported by TUKO.co.ke, Wanjiru revealed that at some point when they started dating, they were very broke.

She used the example of how they couldn’t afford to pay for their engagement photo at Uhuru Gardens to explain their past situation.

The mother of three remembered how they were super excited after a friend offered them a photo shoot at Uhuru Gardens, little did they know it wasn’t for free.

The couple had no money and were forced to leave a speaker as a security before they were allowed to leave.