More
HomeEntertainmentI was Rejected 4 Times; Young Lady who Graduated as Only Female...
Entertainment

I was Rejected 4 Times; Young Lady who Graduated as Only Female First-Class in Her Department & Best Student 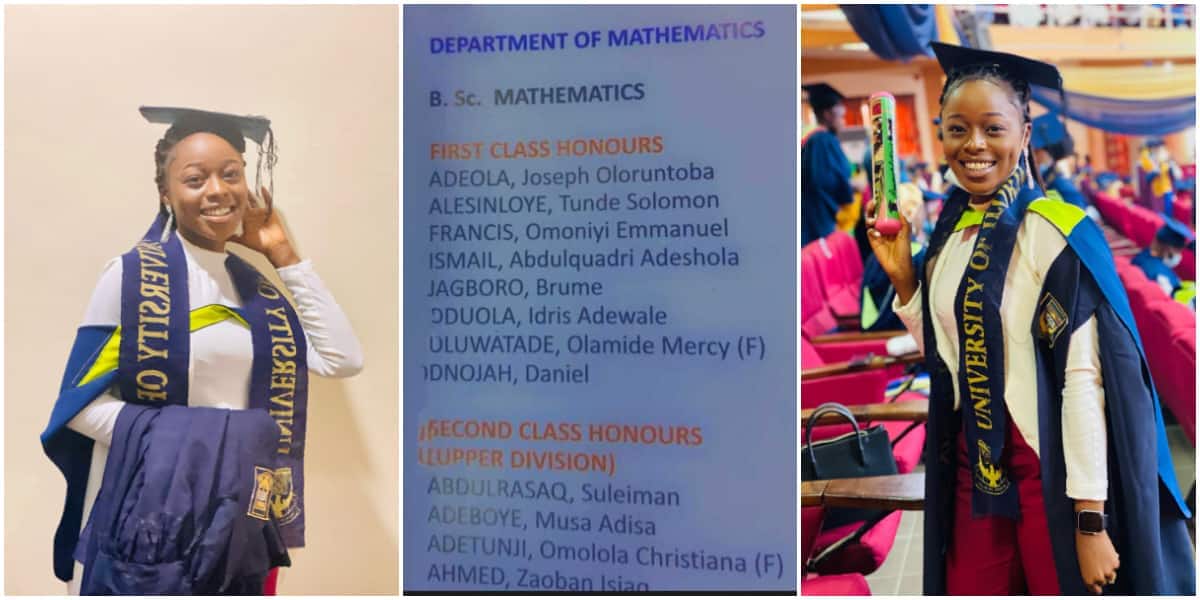 ‘The future is female’ growing narrative seems to also have a bearing in the academic world as Nigerian female students continue to smash records in their fields of studies.

Like high-flying law graduate Olajumoke Sorungbe who made history in UNILAG by finishing as the only first-class in her department, another smart lady has blazed the trail in UNILORIN.

Olamide Oluwatade is her name. The young lady, on the 23rd of October, 2021 finished her mathematics programme at the University of Ilorin as the best graduating student in her department after finishing with a CGPA of 4.65.

The lady who nursed the ambition to be a medical doctor while growing up was also the only female first-class graduand in her department.

She was rejected 4 times

In a report obtained by TUKO.o.ke, Olamide stated that she decided to settle for mathematics after she was denied medicine 4 times.

According to her, she was good at it and this also fuelled her decision to stick to it.

“After 4 years of failed attempts to study medicine in the university, I decided to study Mathematics because I was good at it.

“…A couple of months down the line, I gained admission which was an absolute pinch me moment because I was rejected for 4 years, it felt like a dream, but it wasn’t all that dreamy because I knew the fees would take a toll on my mum.”

She worked to see herself through school

The young lady said she lost her father a week to the university entrance examination and things became more difficult from that point.

But Olamide was determined to continue her studies and so had to work within and off-campus to support her education as well as lessen the burden for the mother.

She blazed the trail leadership-wise too

While people would want to believe she never engaged in any other activity aside from always reading her books, Olamide said that wasn’t the case as she had fun in school.

“I served as the Student Representative Council for 2 years, I was among the female football team of the department, I volunteered in taking tutorials for students, and I was selected as the financial secretary for the final year department committee.”

Meanwhile, TUKO.co.ke previously reported that a young Nigerian lady had bagged an award for emerging the overall best student in her faculty.

Celebrating the feat on her LinkedIn wall, the young lady said it still feels surreal to have achieved such feats.

Wakilat revealed that though she had recorded a GPA of 5.0 in her first year, becoming the best student wasn’t in her plans initially.

With time, the goal grew on her and she was able to combine academic excellence pursuit with other activities on campus that include journalism, entrepreneurship, mentoring junior colleagues amongst others.