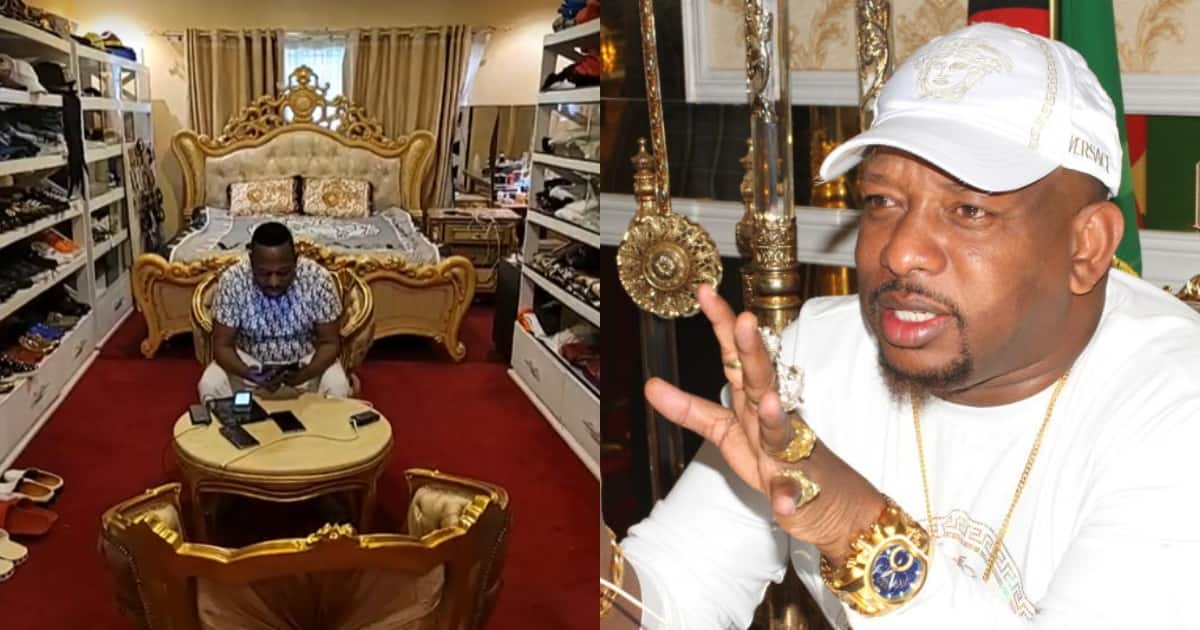 The flamboyant former Nairobi Governor Mike Sonko is known for living life on the first lane and his love for the finer things in life.

While interacting with his fans on Facebook on Thursday, November 25, Sonko, who recently admitted being an insomniac, showed a sneak peek of his expensive and expansive bedroom.

As seen in the video, the room is filled with expensive designer shoes arranged neatly in rows on long white coloured shelves fixed on the opposite sides of the walls.

On the far end of the room, between the shelves lies a king-size, gold-en-crusted bed that is also neatly spread.

In the middle of the room, where the politician was doing his live interaction, there are two chairs and a table that are all, seemingly gold plated.

The floor is covered wall to wall with a royal, red carpet that gives the room the illusion of a palace.

The colossal bedroom is also fitted with the most unique and costly creamy coloured décor.

In other news, Sonko showed off his late dad’s expensively decorated resting place that is fitted with gold crosses, red carpet and valuable lighting.

In a Facebook post, Sonko penned an emotional message to his late dad Gideon Kioko Mbuvi Kivanguli as he commemorated this year’s Father’s Day.

It is barely five years since Gideon Mbuvi passed in 2015, but there is no doubt that his spirit still lives on at his resting place.

The resting place is expensively decorated with gold crosses, red carpet and valuable lighting that will remain iconic for years to come.

During a tour in the Middle East, Sonko lived up to his reputation and splashed a whopping KSh 4.3 million towards a gift for his fair lady.

In an undated Instagram video, the leader was spotted browsing through a high-end jewellery store as he inquired whether the ornaments were made of gold and diamond.

Then, he tried to single out a few items that captured his eyes.

Like the VIP he is, the governor sat still as the store’s staff catered to his needs.

I Dropped on The Floor and Cried when They Said My Baby Had Died, Size 8

Hassan Joho and Junet Mohammed Spotted in A Bentley Mulsanne Worth...