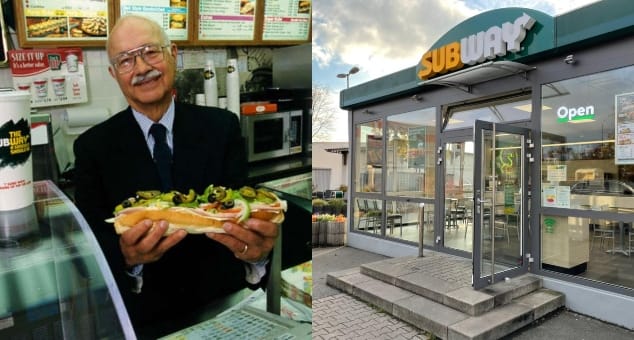 Sandwich lovers across the world are in mourning following the demise of Subway sandwich co-founder, Peter Buck.

Buck, who was a nuclear physicist and born in Portland, Maine, in 1930, died at a hospital in Danbury, Connecticut, on Thursday, November 18.

His death was confirmed by the company, Subway in an official statement seen by TUKO.co.ke on social media.

The late Peter Buck died at the age of 90.

According to Fox2Detroit, the company announced Buck’s death but did not disclose the cause of his death.

Subway CEO John Chidsey mourned the late Buck in the best way he knows how as he credited the co-founder’s vision of helping grow the company from one shop into the world’s largest restaurant brand.

“He was a shining example of a dedicated, hands-on leader, and an integral member of the Subway family. We are forever grateful for his countless contributions and I speak on behalf of all of us at Subway when I say that we will honour his legacy as we continue to build this incredible brand.” Chidsey stated.

Following news of Buck’s demise, countless people from across the world took to social media to condole with his family.

TUKO.co.ke understands Subway now has more than 40,000 locations worldwide, topping competitors such as McDonald’s and Starbucks.

Reports indicate that Peter Buck’s KSh 100,000 investment in a family friend’s Connecticut sandwich shop in 1965 was the genesis of what is now the world’s largest restaurant chain.

The late Peter Buck graduated from Bowdoin College in Brunswick, Maine, in 1952.

The businessman went on to earn a master’s degree and a PhD in physics at Columbia University.

In 1957, late Peter Buck was hired by General Electric where he worked as a physicist at a laboratory in Schenectady, New York.

He worked on atomic power plants for U.S. Navy submarines and ships.

According to an obituary prepared by Peter Buck’s family, he also worked for United Nuclear in White Plains, New York, and Nuclear Energy Services in Danbury, where he made his home.

Buck was also big on philanthropy and made significant donations to many organisations including the Smithsonian Institution, to which he gave a 23-carat ruby named after his late second wife, Carmen Lucia Buck, in 2004.

Akothee’s message to Rue as she graduates, Jalang’o lectures Sh18K boy on Camera & other stories on #PulseUhondoMtaani

My Husband Is Not a Dog: Nollywood Star Tells Ladies Who...