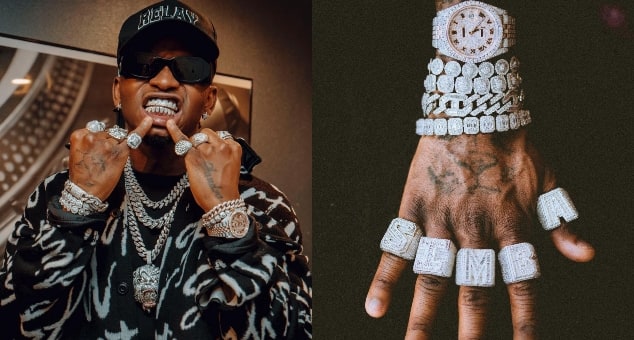 It goes without saying that Diamond Platnumz loves bling and can spend a fortune just to get the glitter.

The WCB boss has a new set of jewellery and wants the whole world to know about them and their price.

To top it off, they were not just your normal bling as the star made sure they were customised to fit his status.

The five rings, all had engravings of single letters in his name ”Simba”.

Being Diamond, the musician had to inform the world about the amount of money he coughed out for the glitz.

On the caption, Diamond disclosed that he spent KSh 10 million on the customised iced rings and a whopping KSh 17.7 million on his watch and the four bracelets.

His latest purchase left jaws on the floor with countless netizens wondering how rich he is to afford all the luxury.

This, however, is not the first time Diamon Platnumz spent a fortune on jewellery.

As earlier reported by TUKO.co.ke, the top brass musician in August showed off a pricey necklace with a half-man, half lion pendant.

On Saturday, August 7, Diamond went on Instagram to show off his new huge neckpiece, a half-man, half-lion pendant that was encrusted with both diamond and gold.

One could spot a lion and Diamond’s face on different sides of the medallion and at the back, there was a drawing of him shirtless with a lion and its cub looking up at him.

The musician disclosed that the piece cost him $48k, which is about KSh 5.2 million and more than TSh 111 million.

In his post, Diamond also urged young men to stop wearing fake chains saying they may lead to cancer.