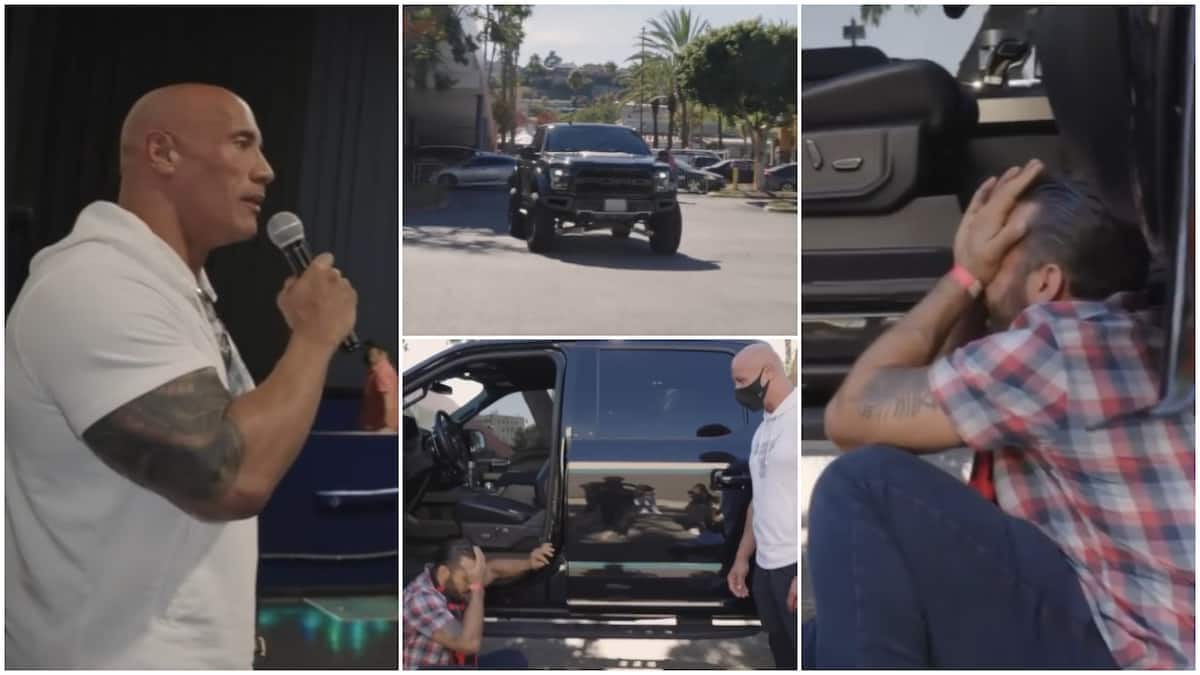 A popular Hollywood star, The Rock, has surprised one of his fans with a new vehicle and the moment was everything as the man broke down in tears.

For the debut of Red Notice, the movie star said he invited some fans to the screening of the movie for free because he wanted to give back.

The actor added that apart from the free movie screening, he wanted to do something really big for one person and the original idea was to give out the Porsche Tycan he drove in the movie.

After Porsche company said no to his request, The Rock never allowed that to disturb his plan so he decided to give out his own truck instead.

Searching for the beneficiary

To do the giveaway, he had to gather as much information as he can about the people who came to the theatre and he found a particular person’s story quite moving.

The Rock revealed that the man, Oscar, has been taking care of his 75-year-old mother for years. He also helps abused women with food. On the day he was going to give him the truck, he handed him a letter first which partly read:

“Thank for your service, brother. Enjoy your new truck…”

The fan went straight on his knees and cried afterwards before hugging him.

Watch the incredible moment below:

“I bet Porsche is regretting now!”

“You are a good man with a good heart. Keep winning.”

“Your a generous man. Thank you for helping others in need that don’t ask.”

The Rock praises policeman resembling him

In a separate article published on TUKO.co.ke, the Hollywood movie star recently recognised a police officer who bears an uncanny resemblance.

The former WWE star said that Fields, who recently went viral for being his doppelganger, is way cooler than him.

Wow. Guy on the left is way cooler. Stay safe, brother and thank you for your service. One day we’ll drink tequila, and I need to hear all your “Rock stories” because I know you got them,” the Jumanji actor wrote.