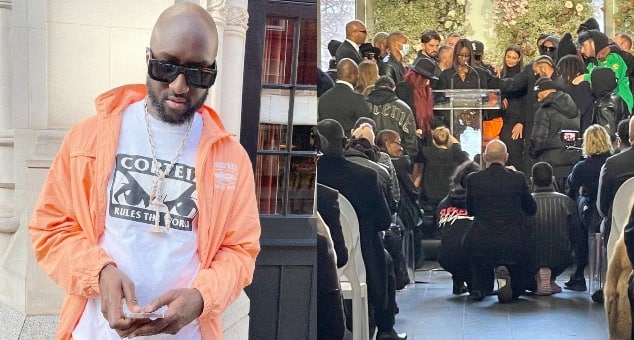 TUKO.co.ke understands designer Virgil’s memorial service was held on Monday, December 6, at the Museum of Contemporary Art in his Chicago hometown.

According to Dailymail UK, late Louis Vuitton and Off-White designer Virgil Abloh’s family was joined by close friends and world-class celebrities to pay their respect nine days after the designer’s sudden demise.

During the memorial service, Virgil Abloh’s wife of 13 years, Shannon Abloh read the eulogy as well as his sister Edwina Abloh and Tyler, the Creator broke down in tears midway.

Legendary artist Hill invoked tears as she stepped on stage to perform her critically lauded 1998 song Everything Is Everything.

The artist choked up and let the band play on as she grieved the late designer.

Hill, who was dressed in all black took a cloth and wiped her tears while background singers harmonised behind the former Fugees rapper.

She took off her sunglasses and continued to dab her face before she began to harmonise again.

As earlier reported by TUKO.co.ke, Abloh tragically passed away on Sunday, November 28, at the age of 41 following a private battle with cardiac angiosarcoma.

TimesLIVE reports that Abloh found out about his cardiac angiosarcoma in 2019, just a year after he landed the big Lous Vuitton gig.

Media reports had earlier indicated Abloh had sought a number of treatments before his sudden death.

Virgil Abloh made history when he became the very first black person to become a creative director at Louis Vuitton.

The fashion icon did not always plan on venturing into the clothing world. He in fact studied to become an architect.

After his ideas caught the attention of Kanye West, he was then hired as a creative director of his Yeezy brand.

He then went on to work for Fendi and shortly after, he started his own brand Pyrex, which turned into the popular Off-White.

Joyce Omondi’s message to her 800K followers, shares 3 facts about herself

Joyce Omondi’s message to her 800K followers, shares 3 facts about...