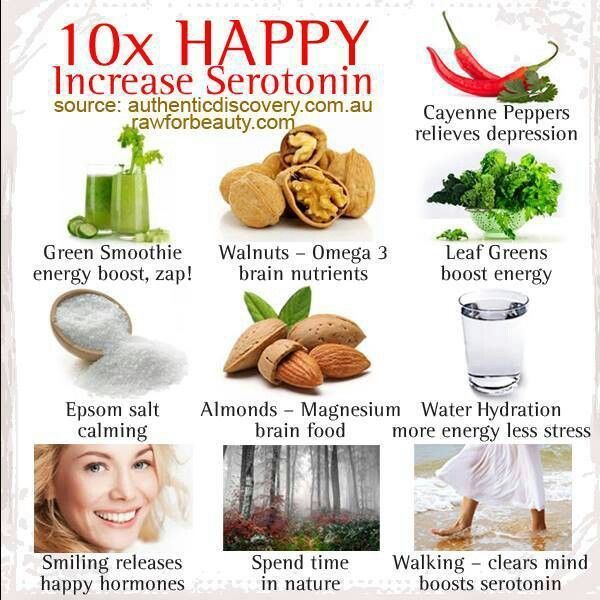 Serotonin levels can be increased through natural strategies such as physical activity, massage or healthy, balanced diet rich in tryptophan. However, in cases where these activities are not enough to increase serotonin levels, the use of supplements with the aim of promoting a feeling of well-being may be recommended.

Serotonin is a neurotransmitter produced from an amino acid, tryptophan, which may be related to various functions in the body, such as regulating sleep and body temperature, promoting good mood and a sense of well-being, and improving cognitive functions. Learn about the role of serotonin in the body.

Therefore, it is important that serotonin levels are optimal so that the person has the maximum benefits possible. Thus, some ways that can help increase the levels of circulating serotonin in the blood to ensure the benefits provided by this neurotransmitter are:

The practice of physical activity helps to increase the levels of serotonin circulating in the blood as it is able to promote the increase in the production and release of tryptophan, which is the amino acid related to the production of this neurotransmitter.

Thus, by exercising regularly or at high intensity, it is possible to increase the levels of serotonin in the blood and reaching the brain, resulting in a feeling of well-being and improved quality of life.

Every type of physical activity is capable of stimulating the production of serotonin, however aerobic exercise is usually associated with a higher level of production of these neurotransmitters and, therefore, it may be interesting for the person to practice running, swimming, walking or dancing, for example.

Check out other benefits of exercise.

Some studies indicate that daily exposure to the sun is also capable of increasing serotonin levels, because sun exposure promotes the production of vitamin D, which has a direct impact on tryptophan metabolism and, consequently, leads to the formation of larger amounts. amounts of serotonin.

Thus, it is recommended that to increase the amount of vitamin D and, consequently, serotonin, the person is exposed to the sun for 10 to 15 minutes a day, preferably during the hours of the day when the sun is not so hot, because it is recommended that in this situation sunscreen is not used. Here’s how to sunbathe to make vitamin D.

Food is essential for the production of serotonin, because it is through food that it is possible to obtain ideal amounts of tryptophan.

Thus, to increase serotonin, it is important to have a diet rich in tryptophan, giving preference to foods such as cheese, salmon, eggs, bananas, avocados, nuts, nuts and cocoa, for example. Discover other tryptophan-rich foods.

Some relaxing activities such as meditation and yoga, for example, can also help to increase serotonin levels, because by practicing these activities it is possible to regulate nervous signals and improve the activity of neurotransmitters, promoting a feeling of well-being.

In addition, as these activities are aimed at promoting the reduction of anxiety and stress symptoms, they also help to regulate levels of cortisol, which has an anti-serotonin action. In this way, it is possible to favor the action of serotonin in the body.

Another way to promote an increase in serotonin levels through an activity that promotes relaxation is through massage, which favors the production of neurotransmitters associated with the feeling of well-being, such as serotonin and dopamine, for example.

When natural techniques are not enough to increase serotonin, the use of supplements that increase the concentration of tryptophan in the body and the release of serotonin may be indicated.

Some of the supplements that may be indicated are 5-HTP, which can easily reach the nervous system and induce the production of serotonin, and tryptophan supplement, when it is not possible to obtain optimal amounts of this amino acid through food.

Furthermore, some studies suggest that the use of probiotics can also promote an increase in serotonin levels, because it promotes an increase in tryptophan levels in the blood, which consequently represents greater amounts of this amino acid in the brain and greater production of serotonin. See more about probiotics and how to consume them.

It is important that the use of supplements is indicated by the doctor or nutritionist according to the person’s needs.