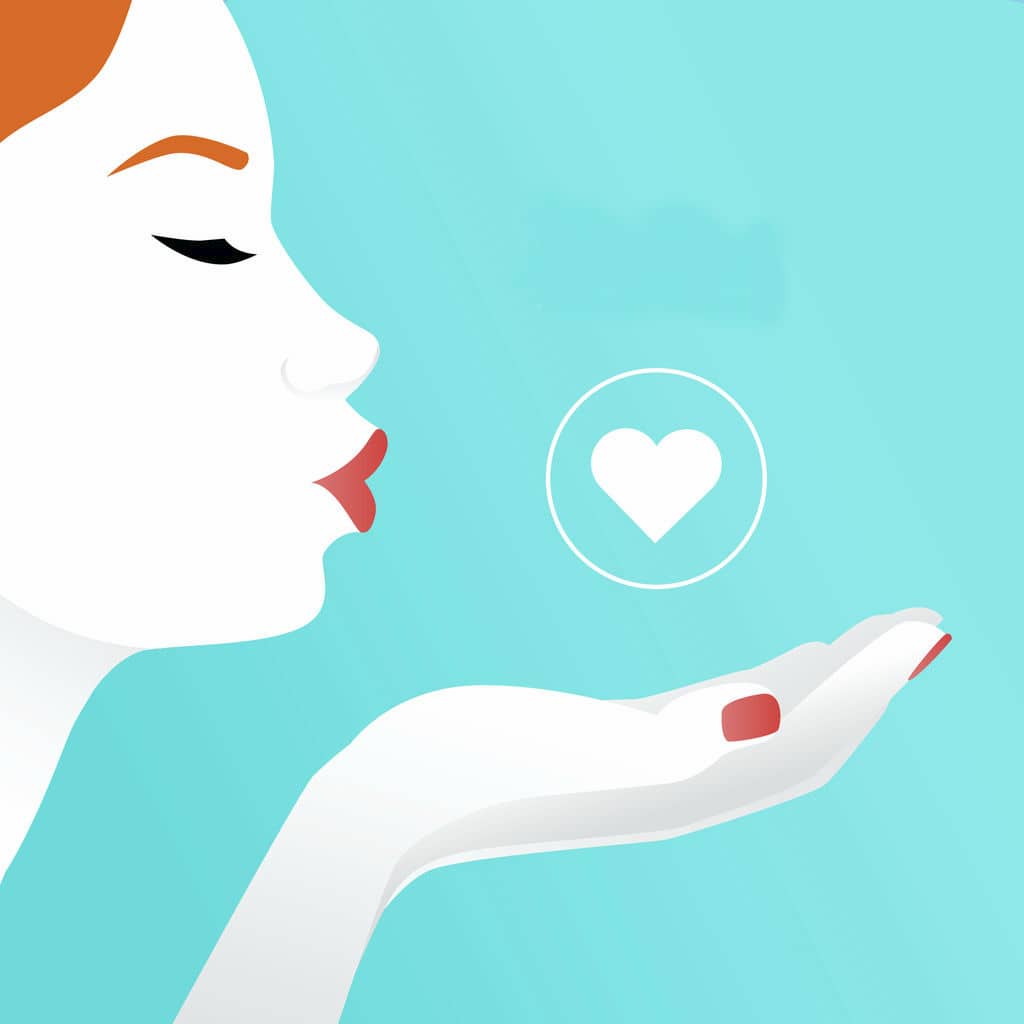 The diseases that can be transmitted by kissing are, in the majority, infections by viruses, bacteria and fungi that are transmitted through saliva or droplets of saliva, such as flu, mononucleosis, herpes and mumps, and the symptoms are usually low-grade fever, pain in the body, cold and lumps in the neck.

Although these diseases are usually short-lived and cure themselves, in some people complications can occur, such as the spread of the infection to other parts of the body, even reaching the brain.

To avoid catching these diseases, it is recommended to avoid intimate contact and kissing with strangers or people without a relationship of trust, because in most cases it is not possible to know if the person is sick or not. The main diseases that can be transmitted by kissing are:

Mononucleosis, popularly known as kissing disease, is an infectious disease caused by the virus. Epstein-Barr, which can be easily transmitted from person to person through saliva, being common to appear after kissing strangers at parties, for example.

Main symptoms: The main symptoms of infectious mononucleosis are fatigue, malaise, body pain and fever, which can be low or reach 40ºC, sore throat and ganglia in the neck region, which last between 15 days and 1 month. Some people may have a more severe variant of the disease, with severe pain in the joints, stomach pain, and spots all over the body. In the presence of these symptoms, one should seek assistance from a general practitioner, who will perform the clinical examination and request blood tests, such as a blood count. Learn how to identify symptoms of mononucleosis.

how to treat: Treatment consists of administering medication to control symptoms, such as dipyrone or paracetamol, rest and drinking plenty of fluids. There is no specific drug to make the infection pass faster, and the virus can remain active for up to 2 months.

Flu is caused by Influenza-type viruses, while colds can be caused by more than 200 types of viruses such as rhinoviruses and coronaviruses, both of which can be transmitted by kissing.

Main symptoms: The flu causes fever that can reach 40°C, body aches, headache, runny nose, sore throat and dry cough. These symptoms last for about 1 week and heal on their own. A cold is a milder variant and causes a runny nose, sneezing, nasal congestion, headache and low-grade fever.

how to treat: Treatment consists of administering analgesic and antipyretic medications, such as dipyrone or paracetamol, in addition to rest, hydration and nutrition that helps to strengthen immunity, with fruits rich in vitamin C, soup, teas with cinnamon and honey. See more about what to eat to cure the flu faster.

Cold sores are caused by the herpes simplex virus, which can infect the lips or intimate region through contact with the saliva of people who have this virus. Transmission is made through direct contact with the lesions of infected people, mainly through kissing.

Main symptoms: The main symptoms of herpes are skin lesions, especially around the lips, which are red, with small yellowish blisters, which cause tingling and pain, in addition to fever, malaise, sore throat and neck nodes. These lesions last about 7 to 14 days, but whenever immunity drops, new lesions may appear.

The confirmation of the infection is made by the general practitioner, through observation of the signs and symptoms presented by the person. Babies or people with weakened immunity, such as with AIDS, for example, can develop a severe variant of the disease, with a high fever, multiple skin lesions, and even brain inflammation.

how to treat: To treat herpes, ointments with antiviral properties can be used, for about 4 days, which help to reduce the multiplication of the virus, preventing it from getting worse or transmitting it to other people. In addition, you can also do the treatment as a pill, which should be taken for about 7 days, and should be prescribed by the general practitioner.

Also known as chickenpox or shingles, chickenpox is a very contagious disease, caused by the varicella-zoster virus, which occurs mainly in children, however adults who have never had or have not been vaccinated can be contaminated. Infection is caused by saliva or contact with skin lesions.

Main symptoms: Chickenpox can be characterized by the appearance of small lesions on the skin, initially with blisters, which turn into crusts after a few days, which can be several or almost imperceptible in some people. There may also be pain in the body, low-grade fever and tiredness, which last for about 10 days. Frail people, such as newborns, the elderly or who have weakened immunity can develop a severe variant, which causes brain infection and risk of death.

how to treat: The treatment is done with care for the wounds, keeping them clean and dry, in addition to rest, hydration and medication for pain and fever, such as dipyrone and paracetamol. The chickenpox vaccine is available free of charge by the SUS for children over 1 year of age and for people who have never had this disease or who have not been vaccinated throughout their lives.

Mumps, also known as mumps or mumps, is also a viral infection caused by the virus. paramyxovirus which can be transmitted by saliva droplets and leads to inflammation of the salivary and sublingual glands.

Main symptoms: Swelling and pain in the jaw region, pain when chewing and swallowing, fever at 38 to 40°C, headache, fatigue, weakness and loss of appetite are the main symptoms of mumps. In men, the mumps virus can also infect the testis region, causing orchiepididymitis, with pain and inflammation in this region. Another complication can be meningitis, which causes severe headache and in these cases it is advisable to go to the emergency room immediately.

how to treat: Treatment consists of controlling symptoms with medications for pain, fever and nausea, with dipyrone, paracetamol and metoclopramide, for example. In addition, rest and hydration are essential, in addition to a light diet, with few acids, so as not to irritate the salivary glands. This disease can also be avoided with the triple viral or tetra viral vaccine, however, it is necessary to boost the vaccine in adulthood to be really protected.

Thrush is also known as thrush and is caused by fungi of the genus Candida. Some species of fungus are naturally present on our skin and others can cause the disease, especially if immunity is low, and can be transmitted through kissing.

Main symptoms: The appearance of a small reddish or whitish lesion on the tongue, which can be painful and lasts for about 5 days, is usually indicative of candidiasis. However, in people who are more fragile or with weakened immunity, such as babies, people who are malnourished or people with chronic illnesses, for example, they can develop the most severe form of the infection, with several white plaques in the mouth.

how to treat: A nystatin-based antifungal ointment can be used in place 4 times a day and in more severe cases it may be necessary to resort to tablets such as ketoconazole, prescribed by the general practitioner. View recipes for home remedies to help fight thrush in various places on the body.

Syphilis is a sexually transmitted infection caused by bacteria Treponema pallidum, but it can also be transmitted by saliva, in people who have small sores in the mouth.

Main symptoms: In the initial phase, small lesions appear in the mouth or in the intimate region, which, if left untreated, can evolve into a chronic disease, which spreads throughout the body, causing brain, cardiac and bone damage. Confirmation of the disease is done by scraping the lesions and blood tests to confirm the presence of the bacteria.

how to treat: Treatment is carried out by the general practitioner or infectologist, using injectable antibiotic penicillin. There is no vaccine or immunity against this disease, which must be avoided using a condom and avoiding intimate contact with strangers.

In addition to these diseases, there are many health problems that are passed through saliva, such as bacteria that cause caries and tuberculosis, and several types of viruses, such as rubella and measles, for example. Care, therefore, should be daily, with habits such as washing hands, avoiding putting your hands to your mouth or eyes, avoiding sharing cutlery and, above all, not kissing anyone.

Party situations, such as carnival, which combine physical wear and tear, lots of sun and alcoholic beverages, make these types of infections even easier, as they can weaken immunity. To try to keep immunity high, it is important to have a balanced diet rich in vitamins, drink plenty of water and exercise. Check out food tips that help boost immunity.

Multiple sclerosis: what it is, symptoms, causes and treatment