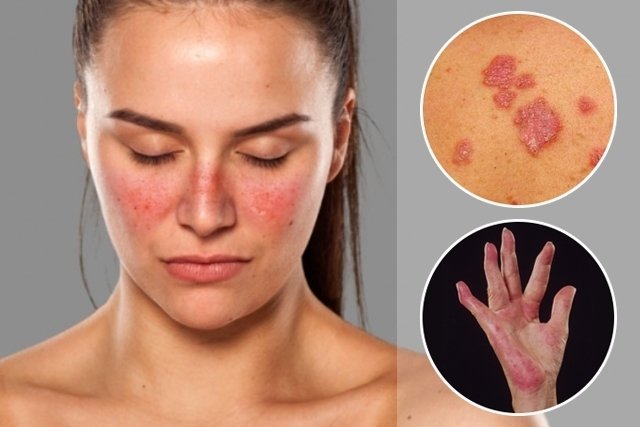 Autoimmune diseases are those characterized by the immune system’s response against the body itself, in which healthy cells are destroyed by the immune system, which may result in some diseases such as lupus, rheumatoid arthritis, hemolytic anemia and Crohn’s disease, for example, which they should be identified and treated as directed by the physician.

The diagnosis of autoimmune diseases is usually made by observing the signs and symptoms presented by the person, which varies according to the disease, and through immunological, molecular and imaging tests.

The main autoimmune diseases are:

Systemic lupus erythematosus, also known as SLE, is an autoimmune disease in which the body’s defense cells attack the body’s healthy cells, resulting in inflammation in the joints, eyes, kidneys and skin, for example. This disease is due to genetic mutations that arise during fetal development and, therefore, it is normal for SLE signs and symptoms to appear in young patients.

Main symptoms: Lupus symptoms appear in outbreaks, that is, the person has periods without symptoms and others with symptoms, and this period is usually triggered by factors that interfere with the functioning of the immune system or that favor the appearance of clinical manifestations, such as the use of some medications or prolonged exposure to the sun.

How is the treatment: Treatment for SLE should be done according to the recommendation of the rheumatologist or general practitioner and aims to alleviate symptoms and prevent them from appearing frequently and extensively, as this disease has no cure. Thus, the physician may indicate the use of anti-inflammatory, corticosteroids and immunosuppressive medications.

Rheumatoid arthritis is characterized by inflammation and swelling of the joints due to the action of the immune system against the body itself. The cause of rheumatoid arthritis is still not very clear, but it is believed that some factors may favor the development of this disease, such as infection by viruses or bacteria, for example.

Main symptoms: The symptoms of rheumatoid arthritis, like lupus, can come and go without any explanation, the main one being redness, swelling and pain in the joint. In addition, stiffness and difficulty in moving the joint, fever, tiredness and malaise may be observed.

How is the treatment: Treatment should be recommended by the rheumatologist or general practitioner, and the use of anti-inflammatory drugs is usually indicated to reduce inflammation and relieve symptoms. In addition, it is important that physiotherapy is performed to avoid limiting the range of motion of the joint.

Multiple sclerosis is characterized by the destruction of the myelin sheath, which is the structure that covers neurons and allows the transmission of the nervous impulse, by the cells of the immune system, resulting in the compromise of the nervous system.

Main symptoms: The symptoms of multiple sclerosis are progressive, that is, they worsen as the nervous system is compromised, resulting in muscle weakness, excessive tiredness, tingling in the arms or legs, difficulty walking, fecal or urinary incontinence, visual changes and memory loss , for example. Thus, as the disease progresses, the person becomes increasingly dependent, which directly interferes with their quality of life.

How is the treatment: Treatment for multiple sclerosis usually involves the use of medications to prevent the disease from progressing and to promote symptom relief, such as anti-inflammatories, immunoglobulins, and steroids. In addition, it is important that the person has regular physical therapy sessions so that the muscles are constantly activated so that complete atrophy can be avoided.

Hashimoto’s thyroiditis is characterized by inflammation of the thyroid due to the immune system’s attack on thyroid cells, resulting in increased or normal thyroid activity, which is soon followed by low activity, developing hypothyroidism.

As the symptoms of Hashimoto’s thyroiditis are the same as those of hypothyroidism, the endocrinologist needs the person to perform some tests that assess the thyroid function so that the autoimmune disease can be confirmed and, thus, the most appropriate treatment can be started. Thus, it may be recommended to perform the dosage of T3, T4 and TSH, in addition to the dosage of thyroid antiperoxidase, also called anti-TPO, which is an antibody produced by the immune system that is increased in Hashimoto’s thyroiditis.

How is the treatment: Treatment for Hashimoto’s thyroiditis is only indicated by the endocrinologist when the person has symptoms, in which case hormone replacement with Levothyroxine is recommended for a period of 6 months. It is also important to pay attention to your diet, eating foods rich in iodine, zinc and selenium, for example, which are nutrients that favor the proper functioning of the thyroid.

Hemolytic anemia happens when the immune system starts to produce antibodies that work by destroying red blood cells, causing anemia. This type of anemia is more common in young adults and it is not yet known exactly why antibodies are produced against red blood cells, however it is believed that the deregulation of the immune system due to an infection, the use of some medications or the presence of autoimmune disease may favor the occurrence of hemolytic anemia.

Main symptoms: Symptoms of hemolytic anemia are related to a decrease in the amount of red blood cells, hemoglobin and, consequently, oxygen circulating in the blood, with weakness, pallor, loss of appetite, headache, weak nails, memory failure, dry skin and indisposition .

Although it is often not possible to identify the cause of autoimmune hemolytic anemia, it is important that diagnostic tests are performed to check for diseases or triggering factors, such as blood count, reticulocyte count, bilirubin dosage and immunological tests, such as the test of direct coombs.

How is the treatment: Treatment indicated by the physician usually involves the use of medications to regulate the activity of the immune system, such as steroids and immunosuppressants. In addition, in some cases the doctor may recommend the removal of the spleen, called a splenectomy, as this is where the red blood cells are destroyed.

Main symptoms: Due to the destruction of the melanin-producing cells, several white spots appear on the skin, which is characteristic of vitiligo. These spots appear more frequently in places that are more exposed to the sun, such as hands, arms, face and lips.

This syndrome is characterized by the production of autoantibodies responsible for chronic and progressive inflammation of the body’s glands, such as salivary and lacrimal glands, resulting in dryness of the mucous membranes.

This disease can only happen due to immune changes or associated with other autoimmune diseases such as rheumatoid arthritis, lupus and scleroderma. Therefore, it is important for the physician to request the investigation of autoantibodies to check if there is another associated disease and, thus, indicate the best treatment.

How is the treatment: The treatment indicated by the doctor aims to alleviate the symptoms presented, and the use of artificial saliva and lubricating eye drops, in addition to anti-inflammatory and immunosuppressive drugs, may be indicated.

Type 1 diabetes is also an autoimmune disease, because it happens due to the attack of immune cells on the pancreatic cells responsible for insulin production, with no recognition of the amount of circulating glucose, which causes more and more glucose to be accumulated in the blood. It is more common in children and teenagers, but it can also occur in young adults.

Main symptoms: The main symptoms related to type 1 diabetes are the frequent urge to urinate, a lot of thirst, excessive hunger and weight loss with no apparent cause.

It is important that the doctor perform tests other than fasting glucose and glycated hemoglobin to diagnose type 1 diabetes, as the symptoms are similar to those of type 2 diabetes.

How is the treatment: For this type of diabetes, the endocrinologist must indicate the use of insulin in several doses during the day or in the form of a pump, because the pancreas is unable to produce insulin. In this way, it is possible to keep blood glucose levels regulated.