More
HomeHealthHealthWarts: what they are, main types and how to remove them
Health

Warts: what they are, main types and how to remove them 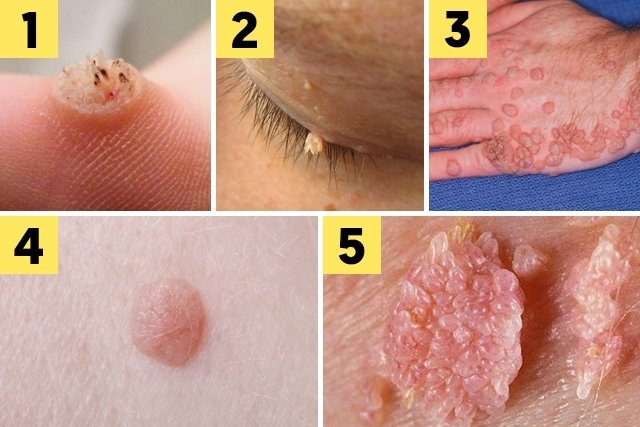 Warts are small benign growths of the skin, usually harmless, caused by the HPV virus, which can appear in people of any age and in any part of the body, such as the face, foot, groin, genital region or hands.

Warts can appear in groups or singly and can easily spread from one area of ​​the body to another. Warts usually go away without specific treatment, but the use of wart remedies can be helpful in speeding up this process.

The 5 types of existing warts, classified according to their location and morphology, are:

It is important that warts are evaluated by the dermatologist, as this way it is possible to verify if they are related to an infectious disease and be indicated the most appropriate treatment to remove them.

How warts are transmitted

Warts are transmitted through direct contact with these lesions. Generally, children are the most affected, as they tend to keep picking at the warts.

However, it is important to clarify that the viruses present in warts only pass to other individuals if they find a place on the skin to penetrate, such as an ingrown toenail scratch or a wound, for example.

How to remove warts

The dermatologist may recommend the use of some creams or ointments based on acetylsalicylic acid and/or lactic acid that should be applied to the wart and help to eliminate the wart. These remedies can be applied at home, at least twice a day or as directed by the dermatologist, or in the doctor’s office.

Cryotherapy is the most used type of treatment to remove warts and consists of freezing the wart through the application of liquid nitrogen in a spray, which makes the wart fall off within a few days. This treatment should be done at the dermatologist’s office to avoid skin burns due to the very low temperature of liquid nitrogen.

Laser surgery is indicated when the person has many warts or when they are spread and it is done under local anesthesia, as the procedure can cause pain and discomfort. Laser surgery is performed by applying a beam of light directly to the wart in order to destroy the wart tissue.

It is important that after laser surgery, the person takes some care with the wound that was left after removing the wart, because there may be a risk of infection. This recommendation is also important in cases where the doctor has cut the wart to remove it, and this procedure is called surgical excision.