Tanzania’s online TV, Kwanza TV, has decried the move by the government to shut them down following coverage of a COVID-19 story.

In a press release, the Kwanza TV management said that the move by the communication authority to suspend them was baffling.

The Tanzania Communications Regulatory Authority (TCRA) suspended Kwanza TV after it shared a health alert by the US Embassy. In the health alert, the US Embassy called on all US citizens to take precaution against the COVID-19.

This is the second time in three months the embassy is issuing a health alert in Tanzania.

According to the statement by the US Embassy, the chances of contracting COVDI-19 in Tanzania remained high. This is despite Magufuli declaring the pandemic over in the country.

The TCRA content committee, in a statement, accused the station of violating several clauses in the Online Broadcasting Act.

Among them was that Kwanza TV had published false content that was likely to mislead and deceive.

No time for response

Kwanza TV further bemoaned the fact that they received the suspension before they had adequate time to respond to the claims of causing public panic.

“To be clear, our right to be heard was not adhered to as we were given less than 24 hours to respond to the initial summons. Which we did hastily only in writing.” Kwanza TV said in a statement.

Not guilty of any offence

Furthermore, the TV station said that they were not guilty of any offence. They were merely spreading information of an already published piece.

“We would like to emphasize that Kwanza TV is not guilty of any offence. Republishing an already published public notice can NOT be in and of itself an offence.” The statement said.

Kwanza TV also said the committee had overstepped its mandate by imposing penalties on the matter.

As a result, they would appeal the decision. 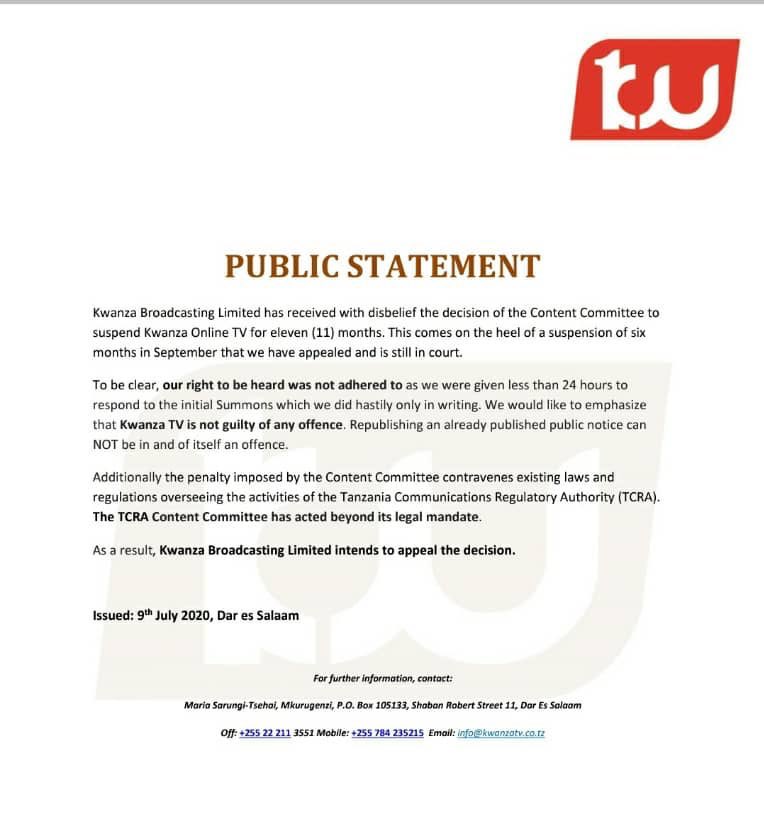 WHO DG, Dr Tedros, piles pressure on Tanzania over the coronavirus

WHO DG, Dr Tedros, piles pressure on Tanzania over the coronavirus