Amnesty Kenya has written an open letter to President Uhuru Kenyatta asking him to call for a cessation of evictions.

Over five thousand people found themselves homeless in Kariobangi on May 4th after their houses came down under heavy machinery.

The forceful evictions took place in disregard of a court order. The order stopped the demolitions of the homes until the court heard and determined the case.

The move came at the worst possible time. With the coronavirus disease ripping through the country, the demolitions exposed countless people to the virus that transfers from person to person in close contact.

The demolitions also happened at a time when the country is experiencing heavy rains. The rains have so far claimed close to 200 hundred lives across the country.

“Your administration has a constitutional obligation under Article 43 of the constitution to defend socio-economic rights and especially the right to adequate housing and reasonable standards of sanitation.” Part of the Amnesty Kenya letter reads.

“There are rational guidelines on forced evictions. They were not followed. Thousands of Kenyans were not accorded sufficient notice to make alternative arrangements.”

Amnesty Kenya then went ahead to lay down their demands to the President, among them, an end to the current evictions.

The letter called on the President to issue an executive order stopping further evictions in Kariobangi North. He would then let the residents rebuild their home until they found alternative settlements.

The body also called on President Kenyatta to instruct national agencies to help with compensating and accommodating the displaced residents.

They also called on him to declare a moratorium on all evictions ‘for 90 days or until the danger we face from the Corona pandemic has passed.’ 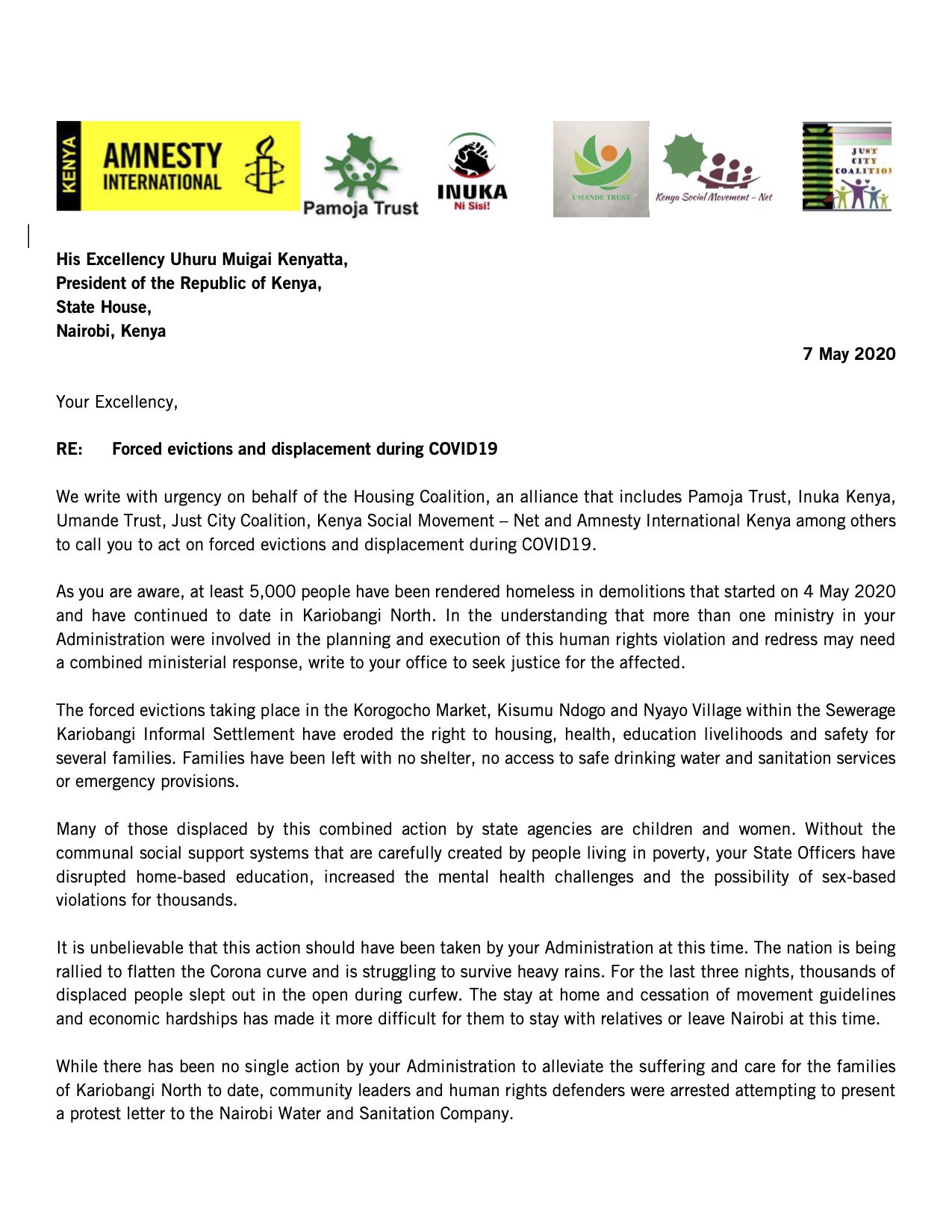 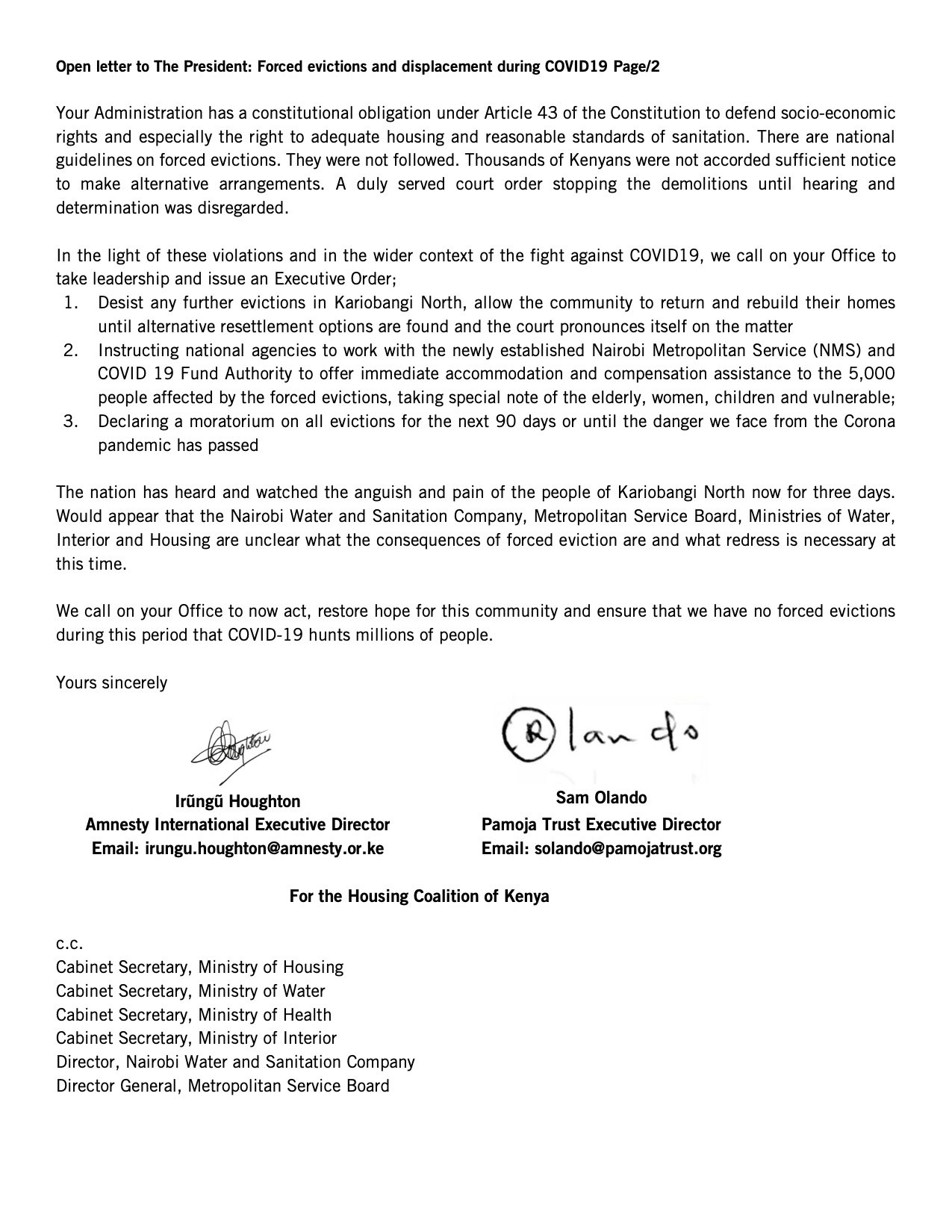 Deputy President William Ruto may be unceremoniously being dumped out of his own government but that did not stop him from making his presence...
Read more
News

Raila Odinga is not in government – President Uhuru clears the air

President Uhuru Kenyatta on Monday 26 October 2020 made it clear that Orange Democratic Movement (ODM) party leader Raila Odinga is not in the...
Read more
News

President Uhuru Kenyatta on Monday 26 October 2020 disclosed that his deputy William Ruto was involved in the progress from handshake to the Building...
Read more
Load more

Silent for three meetings, Lautaro Martinez got annoyed on Saturday against Genoa. An annoyance that he hopes to be temporary while his aborted...
Read more

Juventus: Fabio Paratici reassures on the future of Paulo Dybala

Paulo Dybala has been one of Juventus' key players since his arrival in 2015. The Argentinian has gradually asserted himself in the Bianconerro squad....
Read more

Apple MagSafe makes a slow charge if not used on iPhone...

Apple MagSafe, Apple's new wireless charger, recharges slower if not used on iPhone 12, according to tests In addition to restoring power to the iPhone...
Read more

Liga: Granada offers Getafe and comes back to Real Madrid

Candidates assumed for European places, Getafe (7th) and Granada (9th) met this evening on behalf of the 7th day of Liga. A...
Read more

Deputy President William Ruto may be unceremoniously being dumped out of his own government but that did not stop him from making his presence...
Read more
Loading...