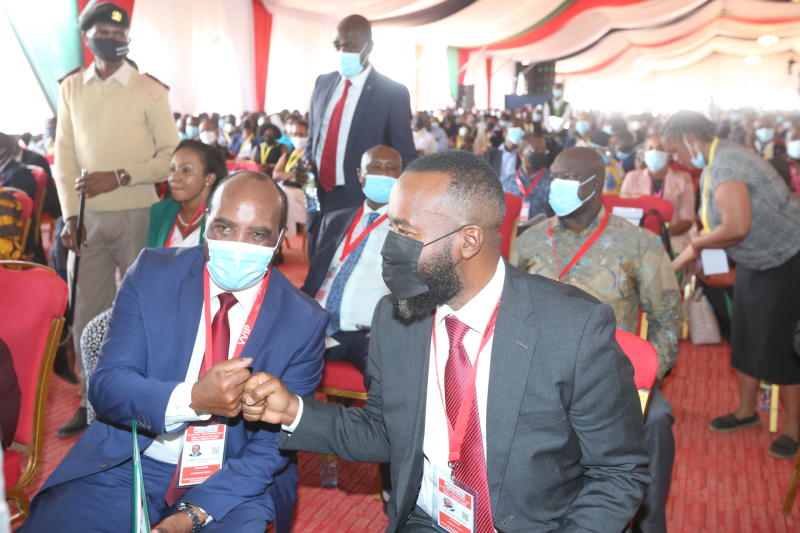 The Seventh Devolution Conference officially kicked off yesterday with a call to the 47 county governments to implement legislation on the impact of climate change.

The conference that has been postponed three times kicked off at Makueni Boys High School. It was opened by President Uhuru Kenyatta who addressed the gathering via a video link.

In attendance was ODM leader Raila Odinga, who was received by host Governor Kivutha Kibwana, Council of Governors chairman Martin Wambora, his deputy James Ongwae and about 25 governors.

Also in attendance were Cabinet secretaries Charles Keter (Devolution), Fred Matiang’i (Interior) and Keriako Tobiko (Environment) as well as 15 senators and a host of MCAs.

Compared to previous conferences, this time the forum recorded low attendance possibly due to the past postponements and the Covid-19 pandemic.

The first order of the day at the venue was planting of trees by the governors and Raila at Kwa Kathoka grounds before the dignitaries made their way to Makueni Boys.

In his address, President Kenyatta noted that the country needed Sh6.8 trillion to reduce greenhouse gas emissions by 32 per cent by 2030.

Uhuru said Kenya was adversely affected by climate change despite having minimal contribution to climate change. The country, he added, was committed to contributing to the global climate action effort.

“Kenya contributes one per cent to global greenhouse emissions yet we rank as the 31st most vulnerable country to climate change,” he said.

Uhuru attributed the current drought affecting more than two million people to climate change, adding that the country was losing three per cent of its GDP to the crisis.

While lauding 33 county governments for enacting legislation related to climate change, Uhuru said more needed to be done in terms of implementation of laws.

The president lauded the arid and semi arid counties of Makueni, Kitui, Marsabit, Isiolo, Garissa and Wajir for establishing climate action funds whose resources go towards combating the serious effects of climate change among the rural communities.

At the same time, Uhuru called for increased partnerships between the national and county governments to improve on the gains of devolution.

“Devolution has had far-reaching impact on the Kenyan people, and therefore we need to build on areas where progress has been slow,” he said, adding that public finance management, legal frameworks and making the government more responsive were areas that needed to be worked on.

Raila told the delegates that climate change was a matter of life and death, saying concerted efforts needed to be taken to address its adverse effects. He noted that economic growth would also be impacted negatively by the harsh effects of climate change.

The ODM leader called for strengthening of the devolved units by way of allocating more funds to the county governments. He noted that strong counties would offer more employment opportunities for the youth.

“The strengthening of the counties was the gist of the BBI (Building Bridges Initiative) and it should not have been a divisive issue,” he said.

He called for enhanced cooperation between the two levels of governments, saying neither could succeed when the other was failing.

Matiang’i drew a parallel between the devastating drought in northern Kenya and rise in conflicts in the region. He said large areas had been riddled with cattle rustling menace as communities competed for scarce resources of pasture and water.

“The increasing violent inter-community conflicts can be solvable through many ways, including fighting adverse climatic effects. We must build better inter-governmental relations since this issue of climate change cuts across the security sector.

“Security personnel are strained as many of them are deployed to tackle cattle rustling. Are we going to have our soldiers fight the Al Shabaab or cattle rustling? A new framework by the security apparatus is needed with resource-sharing frameworks required to end conflicts,” said Matiang’i.

The CS said resources scarcity due to climate change and violent inter-community conflict were related and had brought suffering to many innocent Kenyans. He said there had been pressure to include CoG representatives in the National Security Council–a proposal that was being considered.

Mr Ongwae said the changing climate continued to pose serious threats to future development, adding that developing countries were likely to suffer the most since food insecurity, water scarcity, urban poverty, high unemployment and low access to quality healthcare were widespread, and key assets such as infrastructure were underdeveloped for current needs.

“As a country, we continue to bear the brunt of climate-change impacts and associated socio-economic losses,” he said.

Makueni Senator Mutula Kilonzo Jr called on the government to ensure that the rivers serving Thwake Dam were cleaned before its construction was completed.

“Cities are digging graves for their citizens across the world through water pollution,” Mr Mutula said.