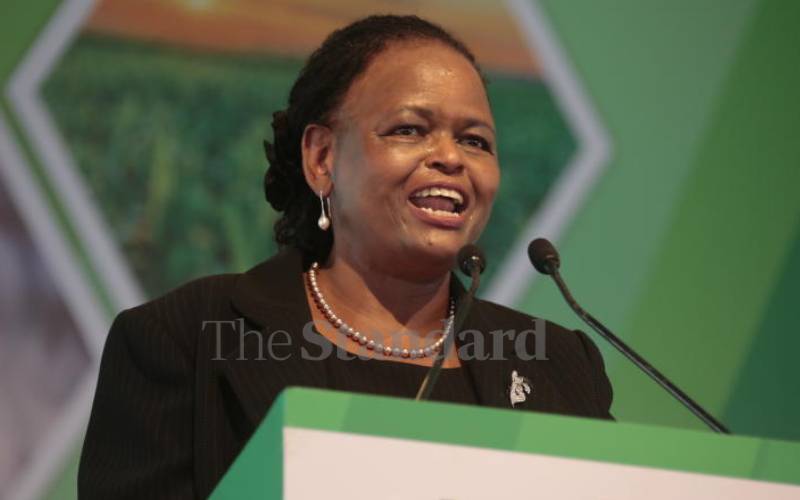 Chief Justice Martha Koome has scoffed at calls to have her quit the committee tasked with overseeing preparations for next year’s elections.

The CJ yesterday told off Deputy President William Ruto-allied United Democratic Alliance, saying her role in the team was anchored in the Constitution.

Koome, who spoke at the devolution conference, was responding to a letter by UDA Secretary-General Veronica Maina that sought her resignation from the Working Technical Committee for Election Preparedness, which the CJ chairs.

“The Judicial Service Act gives me the mandate to be the link between the Judiciary and other government agencies,” she said, adding that the calls by Ruto’s allies had left her “discouraged”.

“Coming here to meet politicians, I asked myself what they would say about me? Then I told myself we have to celebrate this Constitution,” she added.

She reflected on Kenya’s constitutional journey that enhanced inclusion, faulting what she pointed out as efforts to sideline the Judiciary.

“The national anthem also reinforces the values by requiring us all, in one accord, to be united and build this nation together. Nobody can expect the Judiciary to work alone and deliver justice.”

The committee membership includes the Independent, Electoral and Boundaries Commission and the ministries of Interior and ICT, and other agencies.

Maina had argued that the CJ was jeopardising the independence of the body that will hear and determine a potential presidential dispute.

“Participating in the committee is also tantamount to participating in election matters and in this case you are wearing the hat of those required to ensure all is set for elections, in this case, being the IEBC and thereafter, you shall be expected to wear the hat of a judge and deliberate and determine any ensuing election disputes. The interchange of the two hats cannot constitutionally be tenable,” she had said.

But Koome dismissed conflict of interest concerns, saying her position as chairperson of the committee would not erode the independence of the Judiciary.

“The independence of the Judiciary is deep and fundamental. It cannot be taken away because I serve in another government agency. We are required by our Constitution to collaborate and coordinate our affairs,” said Koome.

“We cannot work in silos and expect to deliver for the people.”

Koome’s remarks could potentially spark a standoff between the CJ and Ruto, who is scheduled to close the conference today. Until yesterday, politics has been missing from the conference’s deliberations. If Ruto shows up as expected today, he could choose to respond to the CJ’s direct rebuff.

His allies have already trooped to his corner, echoing the push to have the CJ exit the team that also includes CSs Fred Matiang’i (Interior) and Joe Mucheru (ICT).

Mutyambai son to face 3 charges over fatal accident in city