In a statement to the public, the doctor confirmed that he contracted the virus while he was on duty.

“On behalf of the National Executive Council, I would like to inform all the KMPDU members and the general public that I have tested positive for COVID-19,” Mwachonda wrote in the press release.

“The infection occurred while dispensing official duties. I am currently in a stable condition and under self-isolation. My family is safe, contact tracing and testing of all close contact are ongoing.” He stated.

Mwachonda called on Kenyans to acknowledge the widespread nature of the illness, while also calling for people not to stigmatise those sick of the virus.

Furthermore, he stated there was hope of beating the COVID due to high recoveries.

“Indeed the high number of recoveries gives us hope that we shall, as a nation, win this war against the invisible enemy upon us,” Dr Mwachonda said in his message of hope.

He urged all Kenyans to adhere to the MoH guidelines to bring down the numbers of infections, popular as ‘flattening the curve.’

He also sent out a word of encouragement to his colleagues, of whom, more than five hundred have already contacted the virus. Close to ten have already died as a result.

“To my colleagues in the frontline, we soldier on in the service to humanity cognizant of the great risk of infection to all of us.”

He also reminded the MoH to provide PPEs and comprehensive treatment for all frontline workers.

Dr Mwachonda has been very vocal about the Ministry of Health protecting the frontline workers. In a recent TV interview, the doctor called on the government to hire doctors as it had promised. Dr Mwachonda was critical of the hiring of the Cuban doctors.

He stated that the process would slow down the fight against the virus. He noted that the doctors needed to first learn of our country’s health sector landscape before working. That would eat up valuable time. 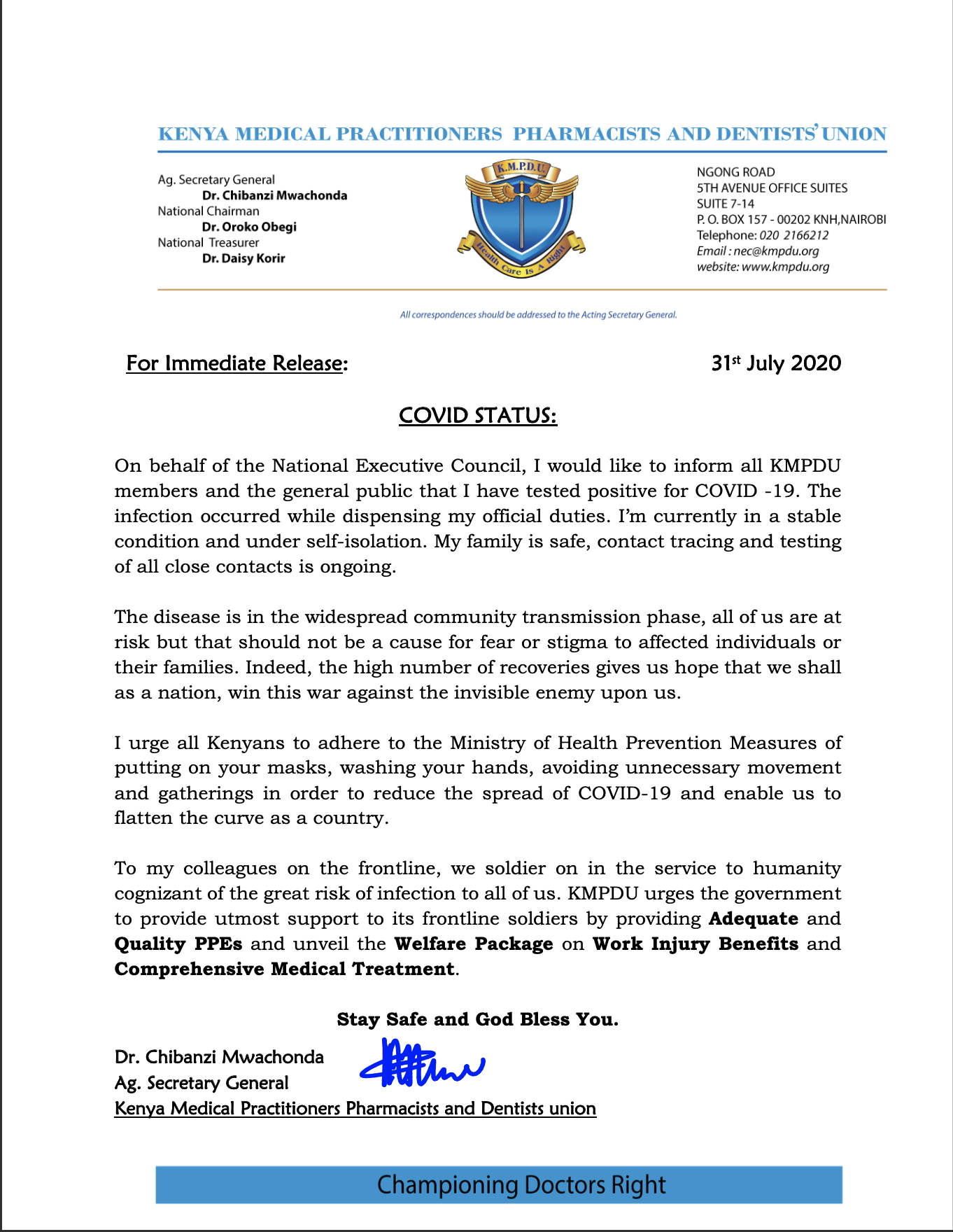 Cabinet Secretary of Education Professor George Magoha has sent a warning to lectures and all teachers regarding non-adherence to the government’s Covid-19 prevention directives...
Read more
News

Majini, Masheito, and masonic are some of the names Kenyans use to refer to dark supernatural powers. Although shunned, these practices continue to happen...
Read more

Man loses penis due to infection and limb is reconstructed in...

Briton Malcolm MacDonald, 45, is between hope and a drama that has lasted for years. After losing his penis due to...
Read more

I don’t trust my wife but I love her so much...

Celebrated Milele FM radio show presenter Alex Mwakideu has revealed that despite loving his wife, he does not trust her. While appearing on Dr.King’ori’s Wicked...
Read more

Government speaks after Tanzania bans Kenyan flights from landing into the...

Foreign Affairs Chief Administrative Secretary Ababu Namwamba on Friday 1 August 2020 made it clear that the relationship between Kenya and Tanzania was indispensable. This...
Read more

Cabinet Secretary of Education Professor George Magoha has sent a warning to lectures and all teachers regarding non-adherence to the government’s Covid-19 prevention directives...
Read more

Uhuru’s allies go after Gideon Moi accuse him of reluctance to...

A section of President Uhuru Kenyatta allies has gone in hard on Baringo Senator Gideon Moi accusing him of influencing appointments in lucrative posts...
Read more

There is no COVID-19 in Samburu! – County Governor shouts as...

Samburu County Governor Moses Lenolkulal has denied the Ministry of Health’s reports that indicated that there was COVID-19 in the County which had caused...
Read more

Celebrated journalist Jeff Koinange has announced on Sunday the 2nd of August that he will return on the radio after testing positive for Covid-19. Jeff...
Read more
Loading...