More
HomeNewsNatembeya bows out in style after more than 25 years of public...
News 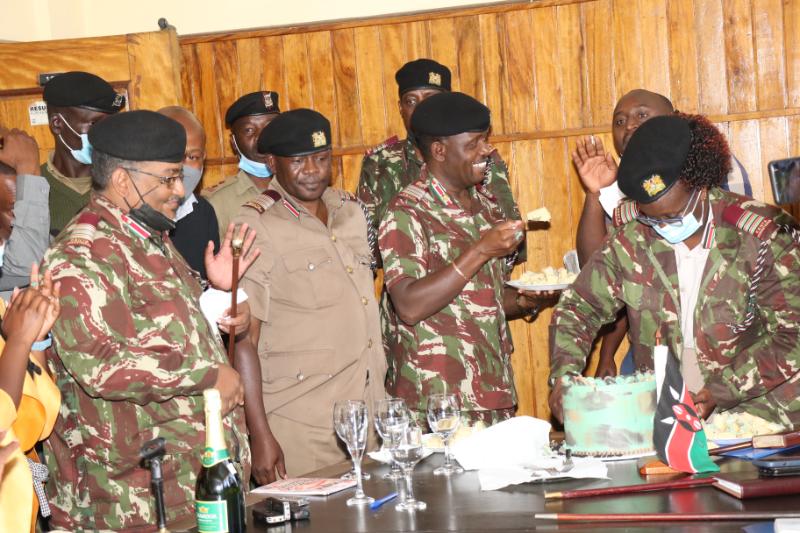 But a journalist pressed him back on the seat and told him the scribes in town were not through with him yet.

Unknown to him, the journalists had planned a surprise farewell party complete with an accustomed cake to cut and champagne to pop.

That was the kind of a person Natembeya was, loved.

Natembeya on Wednesday announced his resignation, a move that many did not see coming.

He said the main reason for his resignation is to allow his venture into politics, stating that he is eyeing the Trans Nzoia Governor seat.

Having served in public service for more than 25 years, Natembeya said he would use his experience in leadership to transform the county.

His staff and even administration officers at the regional headquarters joined the party before going for an impromptu photo shoot with their outgoing boss.

However, he has not revealed on which party he will vie for the seat.

“I am no longer the Rift Valley Regional Commissioner,” Natembeya said.

Even though he resigned, Natembeya was moved to Harambee House where he will clear his way out.

Natembeya thanked President Uhuru Kenyatta for granting him the opportunity to serve Kenyans and his support especially during the two and half years he was the Rift Valley Regional Commissioner.

Following his resignation, Nairobi and Rift Valley regions on Wednesday got new Regional Commissioners in changes announced by the Office of the President.

The changes were announced by Interior Principal Secretary Karanja Kibicho who said they be effected immediately.

In the new changes, Natembeya will be replaced by Makueni County Commissioner Mohamed Maalim.

The new Nairobi RC will be William Kangethe Thuku who was two weeks ago named the Chief Administrative Secretary for Correctional Services.

The changes come in the wake of calls for the ways operations are conducted in the regions ahead of the August polls.