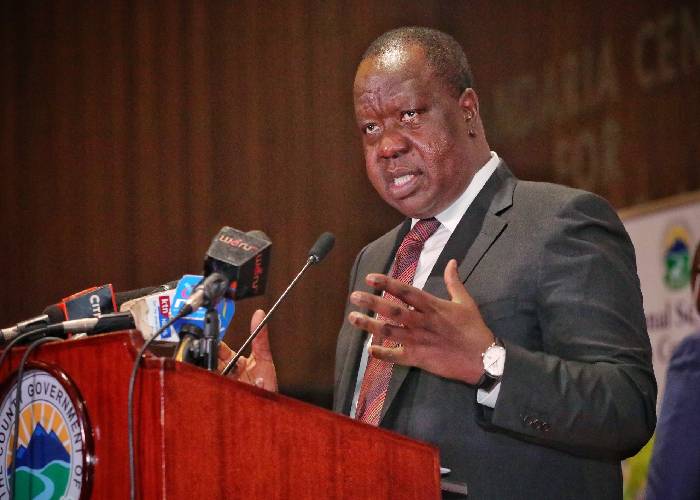 Interior Cabinet Secretary Fred Matiang’i on Monday said he will not resign, weeks after MPs allied to Deputy President William Ruto accused him and his ICT counterpart of interfering with the work of the Independent Electoral and Boundaries Commission (IEBC).

In a statement released to the media, Matiang’i dismissed claims that he and his ICT counterpart were interfering with the mandate of IEBC, saying they were meant to distract him from discharging his duty.

“Those calling for my resignation want to distract him and security officers from executing their responsibilities of protecting all stakeholders,” he said.

Matiangi while also defending CS Mucheriu said the role of the two ministries was to create the right environment for the electoral agency to discharge its duties in line with their official dockets.

“We, in the security sector, do not conduct elections— that is the mandate of the IEBC, and our work is to support the Commission by providing security,” said CS Matiang’i.

He said he would not be provoked into engaging his detractors into further cheap rhetoric and urged government administrators to focus on their duty.

“Don’t be intimidated by threats, you are only answerable to the people of Kenya and your job is to uphold zero-tolerance policy to those who encourage political intolerance,” he said.

The Interior CS also ordered county commissioners and other grassroots administrators to prioritise the security of women aspirants in forthcoming elections.

He said special attention would be given to them as they were more susceptible to intimidation or election-related attacks.

“The maturity of our democracy will be tested on the level of participation of every voter and aspirant in the elections, including women and the vulnerable population,” the CS remarked.

Matiang’i instructed County Commissioners and other National Government Administration Officials (NGAOs) to create a database of all-female aspirants and to map out their security needs.

Each administrator will be expected to beef up women candidates’ security needs against violence and harassment.

United Democratic Alliance (UDA) on Saturday wrote a protest letter to the (IEBC) over the inclusion of the CSs Matiangi and Mucheru into multi-agency team planning for a free, fair and transparent General Election.

UDA wants Matiang’i and Mucheru removed from the team since they are openly campaigning for Raila’s candidature.

Through its Secretary-General Veronica Maina, UDA also wants the electoral body to stop the CSs from meddling in the election preparations and instead take charge of the exercise as per the law.

Maina said it was wrong and dangerous for IEBC to allow CS Matiang’i to dictate to it how to prepare for the election when it is their constitutional mandate to carry out elections.

“Elections are a democratic process that has nothing to do with government functionaries. Article 81 of the Constitution is clear that free, fair and credible elections are administered in an impartial manner and free from intimidation and improper influence,” UDA said.