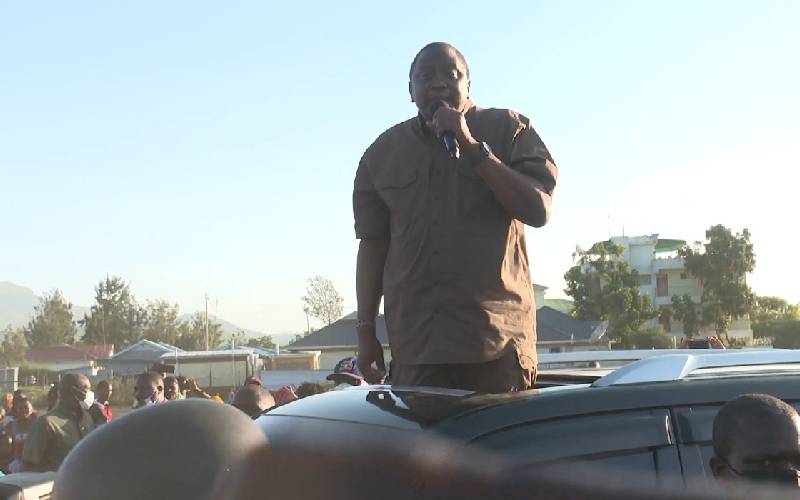 President Uhuru Kenyatta made a surprise visit to Kisumu Port to inspect the progress of activities at the facility as plans for its official unveiling gathers pace.

In an impromptu visit that left security officers and local leaders baffled, the rotor blades of three military aircraft flying to the port alerted the lakeside city of the presence of the Head of State.

Within minutes, security officers blocked access to the port to all civilians. Journalists too were blocked from entering the port.

Interestingly, even senior government officials including the County Commissioner were unaware of the visit and claimed they did not know the guest who had landed at the port.

Save for June 1, last year, all the visits the president has made to the port have all caught officials unawares.

A source privy to the president’s movement within the port yesterday, however, told The Standard that the president visited the shipyard.

At the shipyard, the construction of another ship dubbed MV Uhuru II is underway and is one of the projects the government is keen on in its efforts to revamp Lake Victoria’s maritime trade.

The president’s helicopters touched down at the rehabilitated port at around 3pm.

It is still unclear the other dignitaries who accompanied the president in his visit. After about three hours, the three military choppers left the port with sources claiming that they were headed to Mbita Causeway. The Sh1 billion causeway has eased the movement of people and goods from Rusinga Island to the mainland.

Although the rehabilitated port which cost about Sh3 billion has not officially been opened, operations have started with ships ferrying goods to neighbouring countries.

The development comes as operations at the port begin to pick up with statistics by the Kenya Ports Authority indicating that the volume of cargo handled at the port has soared in the last year.

The statistics paint a positive picture of the potential of the investment to transform the region’s blue economy and give Kenya an edge to compete for control of the triangular trade.

The recent revival of rail services connected to the port is also icing on the cake and is among the projects the government is keen to tap into to help revive the blue economy.

The projects are part of a wider scheme aimed at increasing exports through the lake while minimizing costs and transportation delays that road transport has always subjected the country to.

Last year, the president also made several trips in the company of the ODM leader to the port.

Yesterday’s visit is a show the President was keen on ensuring the completion of various projects launched in Nyanza following his deal with Raila.

Contractors have been racing against time to complete the projects with Uhuru’s handlers keen on ensuring they are officially launched before he leaves office after the August polls.