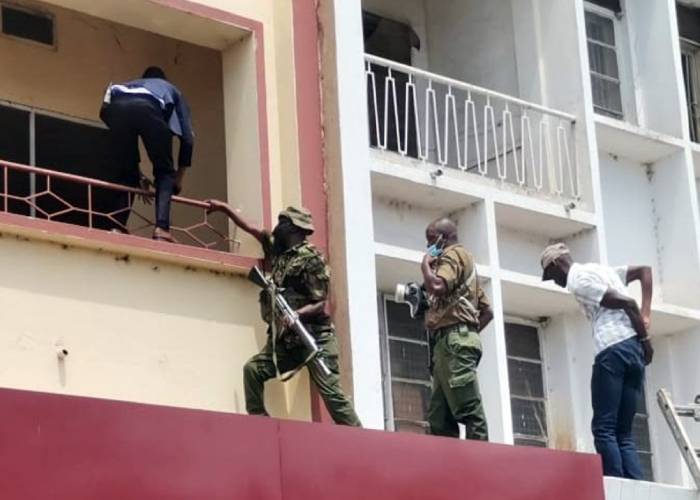 Police have ended a four-and-a-half-hour siege at Equity Bank on Angawa Avenue in Kisumu after efforts to smoke out suspected robbers returned negative results.

Police suspect that the robbers disguised themselves as clients and left the premises minutes to 1pm.

“We have in our possession a man’s shirt. We suspect that the robbers had a change of clothes and left the banking hall during the evacuation of distressed clients,” Nyanza Regional Commissioner Magu Mutindika told The Standard.

All the clients and Equity Bank staff members evacuated from the besieged building were taken to Central Police Station, where police will interrogate each of them.

“We’re hoping to identify the owner of the shirt, who would, in turn, lead us to his other three accomplices,” said Mutindika.

The regional commissioner said the immediate investigations “will be conducted in a fair and thorough manner”.

Police will rely on witness statements, CCTV recordings, among other documents, to identify the suspects, added the regional administrator.

Upon accessing the banking hall, one of the suspects wrote a note and handed it over to one of the tellers, said Mutindika.

Shortly thereafter, the suspected robbers threw a teargas canister on the floor, forcing some of the clients and staff members to flee.

Consequently, eyewitnesses filed a suspected robbery report minutes to 11:30am.

At noon, more police officers were deployed to the scene, with the total number of officers in operation rising to 30.

Around that time, Angawa Avenue was cordoned off and police declared it an active crime scene.

A firefighting vehicle was brought to the scene to help neutralise the effect of the teargas that the suspected robbers were “hurling while still holed up in the hall”.

At 12:30pm, police termed the operation as “delicate”, saying firing at the suspected robbers could risk the lives of clients locked up in the hall.

Police further said that the suspected robbers were fighting back by firing teargas canisters and live bullets.

At 12:45pm, police said they suspected some of the robbers were hiding inside the bank’s toilet as clients and staff members were being evacuated.

At 12:50pm, police said they were waiting to be given the bank’s architectural plan before they could lay an ambush.

At 1pm, authorities gained access into the bank’s ground and first floors.

Several armed cops in uniform could be seen entering the premises through windows and rudimentary openings in the building.

After a thorough two-hour combing of the scene, police announced at 3pm that they had ended the siege after ensuring that no suspect was in any of the rooms inside the bank.

No person was injured during the incident, police said.

“There is also no indication that money was stolen,” said Nyanza regional commissioner Mutindika.

And they’re off! Raila’s declaration to signal tooth-and-nail presidential campaigns

And they’re off! Raila’s declaration to signal tooth-and-nail presidential campaigns