The US Government has warned its citizens that it will not repatriate them soon as the COVID-19 situation in Tanzania gets worse.

In the alert released earlier today, the US government stated that the citizens would remain in Tanzania for an indefinite period. However, they would look into it at the earliest convenience.

“US citizens who remain in Tanzania should be prepared to remain abroad for an indefinite period. The US government does not anticipate arranging additional repatriation flights in Tanzania at this time.” The alert says.

Lack of updates a concern

The Embassy expressed concern about the lack of data regarding the illness in Tanzania, a sentiment that Tanzania’s opposition shares. It pointed to the situation is worse than is in the public eye.

“The risk of contracting COVID-19 in Dar es Salaam is extremely high. Despite limited official reports, all evidence points to an exponential growth of the epidemic in Dar and other locations in Tanzania.” Part of the alert reads.

The Embassy goes on to reveal that hospitals in Dar are, reportedly, overwhelmed by COVID-19 patients.

“Many hospitals in Dar es Salaam have been overwhelmed in recent weeks. Limited hospital capacity throughout Tanzania could result in life-threatening delays for medical care, including for those with COVID-19.”

The US health alert now lends credence to the claims spreading across Tanzania of a growing number of people infected and dying from COVID-19.

In his last address to the nation, Magufuli dismissed the results from laboratories in Tanzania. He claimed that they were returning false positives to get donor funds.

False positives in COVID-19 are a point of concern, for sure. Nonetheless, they do not negate the desperate situation that COVID-19 has caused the world over.

Recently, Magufuli failed to show up in a teleconference between East African leaders on how best to deal with COVID-19. 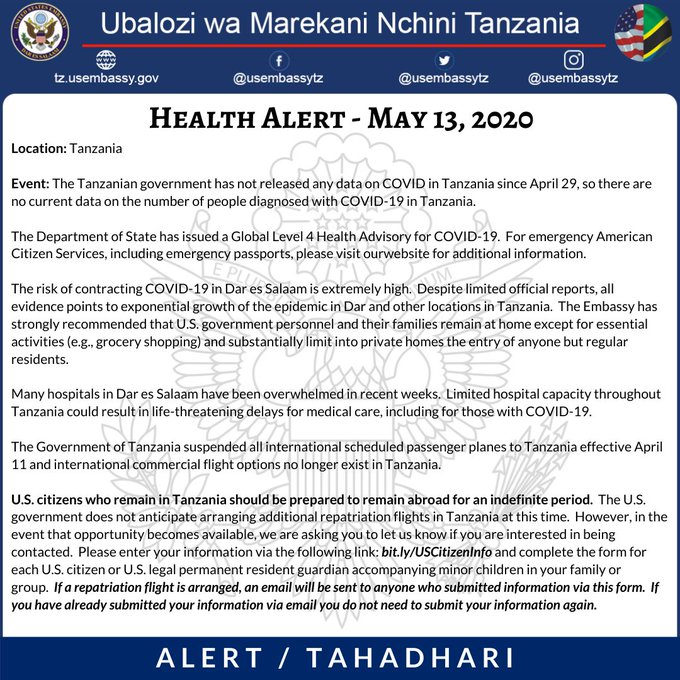 Boyfriend to murdered civil servant was a seminarian, family reveals

Boyfriend to murdered civil servant was a seminarian, family reveals

Murathe reveals plot to evict Ruto from his Karen home

Dennis Itumbi hits out at Atwoli after saying DP Ruto will...