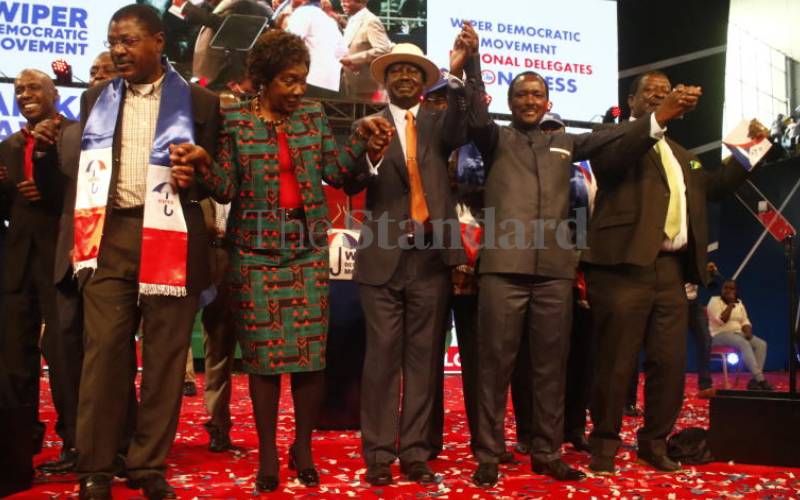 Kalonzo becomes the third leader in the One Kenya Alliance after Kanu chairman Gideon Moi and Ford Kenya boss Moses Wetang’ula to get the nod of their parties.

The endorsement by the National Delegates Congress (NDC) might have been a foregone conclusion, but what is still not clear is the final leadership matrix after the ambitious party chiefs sit down at the negotiating table.

The possibility of a unity pact between Kalonzo and ODM leader Raila Odinga can also not be ruled out especially after Raila received a warm welcome when he entered the Kasarani gymnasium a few moments before Kalonzo.

The two leaders have had a fractious relationship in public, which has threatened the chances of the duo linking up to take a third stab at the presidency. But some of the uncertainty was eased yesterday by the ODM leader who suggested that the two leaders have been gravitating towards each other.

Taking a swipe at Deputy President William Ruto, Kalonzo said the DP had a history of breaking promises and questionable integrity.

But the loudest voice in the room was the clamour for unity among the leaders.

Raila started off by dismissing questions about his invitation to the event, saying that Kalonzo was like his brother.

The former prime minister reminded the NDC that ODM and Wiper were “cut from the same orange”.

“We were together in the Orange side that won the 2005 referendum on constitutional review against the Bananas,” he said.

Raila said that he and Kalonzo had stuck with each other through “near misses” in the last two elections and, because of that, their bond was still strong.

“(In 2013 and 2017), we did not have anything to share among us. We all went away with nothing. I am certain that Kalonzo and I want the same things and our paths will cross again in future,” said Raila.

The Kanu chairman said that Kalonzo’s manifesto aligned with the idea OKA had for the country. “Part of that manifesto, if not all of it, is part of the ideals that we all believe in OKA. It is ideals that will for sure change the lives of Kenyans.”

Wetang’ula, who was with Raila and Kalonzo in the Coalition for Reforms and Democracy in 2013 and the National Super Alliance in 2017, said they had been tested and would prevail.

“We are not meeting for the first or last time. We will continue walking together. OKA wants the best leadership for this country,” he said.

Tuju said he was encouraged that Mrs Ngilu had joined OKA leaders to support Kalonzo. “You are a consummate diplomat who has played a part in bringing people together in neighbouring countries such as Sudan, Democratic Republic of Congo and Somalia. Will bringing five men together be difficult for you?”

Mudavadi echoed Kalonzo’s proposal to revive the economy, saying it was his party’s wish that the next government makes it a priority. “There is no dignity in poverty. We must, as Kenyans, cooperate and advise each other so that we can get on the path to reviving the economy.”

Kanu Secretary-General Nick Salat said the leaders “will be sorry” if they take the election lightly. “The next president is seated here. As Kanu, our rallying call is peace, love and unity. That is what Kenya needs.”

Mental disorder? Kiraitu tells off Ruto over ‘not campaigning’ remarks

Mental disorder? Kiraitu tells off Ruto over ‘not campaigning’ remarks

Police net bhang worth over Sh6 million in Nyandarua