OM-PSG: an electric atmosphere at the Orange Vélodrome 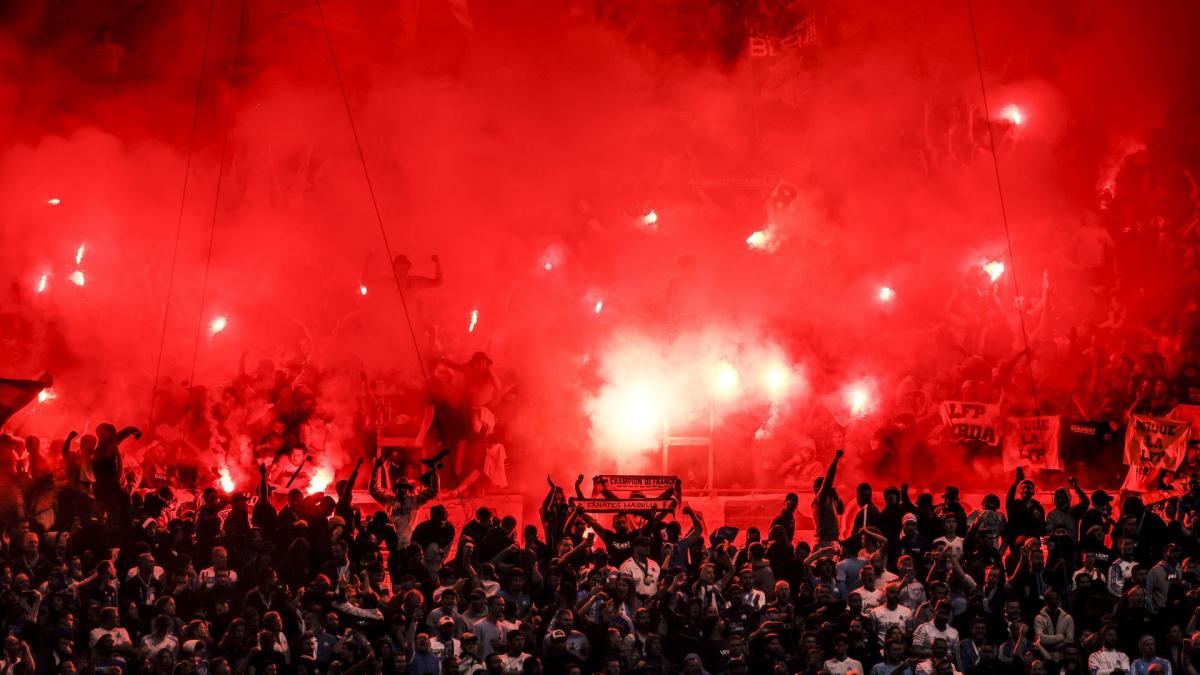 OM were potentially on the podium with a victory against PSG this Sunday evening. Beyond the poster, which usually stirs the fire, it was very special on October 24. Foot Transfer market tells you everything.

This Sunday, Olympique de Marseille, three days after their match in Rome against Lazio (0-0), hosted Paris Saint-Germain in one of our great classics of the French championship. Obviously, you did not have to be a diviner to know that this meeting was going to be tense, even without the presence of supporters of the club from the capital.

On site, Foot Transfer market arrived around 5 p.m. At the Prado roundabout, smoke was agitated in the air and one even arrived on the flowers planted on the said roundabout. A few hundred meters further on, in front of the square where, a few weeks earlier, it was time for meditation after the death of Bernard Tapie, the songs were going even louder, the firecrackers were backfiring in all directions, and the smoke, prohibited in the stadium, waved in the airs of the Phocaean City.

From 6.30 p.m., the supporters, who sang on Boulevard Michelet, began to rush into the Olympian arena. Obviously, as soon as the Parisians entered training, the whistles rose from the already well-stocked spans while the confrontation was not going to start for at least a good hour and a half. When entering the field, the tifos, north side for the LFP and south side with an OM logo, were deployed.

Twice in the first period, OM supporters railed. The first time against the referee who, finally, was going to refuse a Parisian goal for offside, then a few moments later for, this time, a goal refused to OM for a lawful position of Pol Lirola. And what about the corners that the Pochettino players had to take? From the first, Neymar refused to go to the corner, the referee temporarily interrupting the confrontation. Lionel Messi, he decided to hit them quickly to avoid any overflow. But, in the end, it was especially outside the stadium that it heated up.

Guendouzi and Payet come in front of the north bend to calm the supports. #OMPSG pic.twitter.com/hfTU6Pybdr

In an instant, the press gallery was soaked in smoke. Itchy throat, nose and eyes. Yes, it was tear gas. At the time, we did not quite understand, we must admit. However, at the break, we saw. In front of the stadium, on Boulevard Michelet, a few individuals seemed to be confronting the police who fired tear gas canisters into the air, one of them hitting a poor tree which had not asked for anything. Supporters obviously wanting to force the entrance to the Orange Vélodrome.

In the second half, the stadium was still hot and even more hot when Benoît Bastien, the referee of the match, went to see the control screen to confirm a red card for Achraf Hakimi, who annihilated a clear scoring opportunity (57th ). Less than twenty minutes later, a supporter of OM (or Messi) entered the field and, going towards the Argentinian, forced the referee to interrupt the game and a dangerous counter-attack from PSG (73rd) . Finally, the atmosphere was incandescent at the end of the meeting, despite the Marseille deficits in the last gesture. Despite everything, Jorge Sampaoli loved this atmosphere. Hope it lasts.

LOSC: Burak Yilmaz, the Kraal descended from his throne

Hamraoui affair: the incredible message from Eric Abidal to his wife

LOSC: Burak Yilmaz, the Kraal descended from his throne

Hamraoui affair: the incredible message from Eric Abidal to his wife

FC Barcelona: Ousmane Dembélé back in the group against Benfica

The truths of Lionel Messi on FC Barcelona version Xavi