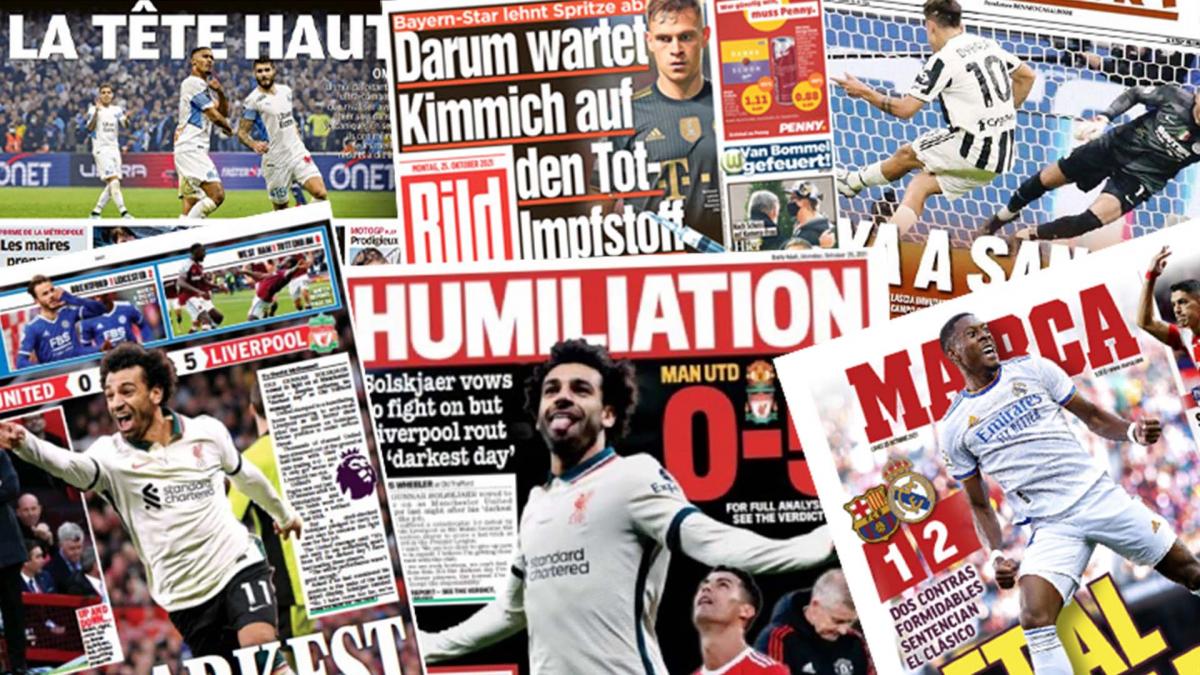 Manchester United are looking for a new manager, FC Barcelona supporters take Ronald Koeman aside after the clasico and the German press outraged by Joshua Kimmich’s behavior, find in your Foot Transfer market press review the latest information from the European sports press.

At Manchester United, it’s dismay. The 5-0 home loss to Liverpool will be remembered by fans for a long time. Red Devils coach Ole Gunnar Solskjaer knows he is in danger after the lesson given by Jurgen Klopp and his team. “It’s my darkest day“, He declared at a press conference, titled by the Daily Express this morning. It must be said that Manchester United suffered its heaviest defeat against its rivals since September 1895. But the Norwegian manager does not admit defeat and does not want to give up. He remains adamant, he is the man for the job. An assertion that shocked the British dailies. “Ole swollen Solskjaer»Exclaims the Daily Mirror, especially since the supporters are clamoring for his head. Moreover, several names are mentioned to succeed him. The Italian newspaper, Daily Sportivo ensures on his front page that Antonio Conte and Zinédine Zidane are approached on the bench of United. The arrival of the 1998 world champion as manager of the Red Devils could be very popular with a certain Cristiano Ronaldo.

In Spain. We were impatiently awaiting the new generation clasico, Real Madrid won 2 goals to 1 on the lawn of the Barcelona rival. “Lethal Madrid” title this morning Marca. For the Spanish daily, the two formidable Madrid counter-attacks sealed the fate of the match. For his first clasico, Alaba surprised everyone and especially scored the first goal of this clasico. “Madrid roars” exclaims the pro-Madrid newspaper AS. On the Catalan media side, it’s a hangover. “No punch” headlines Mundo Deportivo. It is “impotence” for the daily Sport. For them, Barça never gave themselves the means to return to the score despite some good chances, and Kun’s goal at the very end of the match. In addition, Barça condemns its supporters. Dutch coach Ronald Koeman was briefly attacked on leaving Camp Nou by angry fans. A few dozen people surrounded his car and cursed him as he left the stadium. Club management have announced that they will make arrangements after this incident.

Kimmich does not want to be vaccinated

Bayern Munich star Joshua Kimmich created controversy this weekend. He made the front page of the national daily Bild this morning because he refused to be vaccinated against Covid-19. 4 players from the Bavarian club have still not received an injection, reports the German newspaper, which according to them shocks millions of Germans. The player defends himself at the microphone of Sky Sports after his match against Hoffenheim: “I want to wait for long studies. I think there are a few other people like me who just have a few concerns, whatever their reasons are. And I think it must also be respected ”. Be careful, Kimmich denies being a fundamental opponent of vaccination. The Bayern Munich doctor ensures that the players often discuss serenely together on the vaccination.