LG announced a week ago the arrival of its new line of sound Xboom Go, which includes three models, the PL2, PL5 and PL7. The South Korean giant sent the three models for testing, and in this triple analysis, we will unravel each one and, above all, the differences between each one.

Are LG’s launches enough to clash with speakers from recently arrived competitors? This is what you see in this triple analysis.

The construction follows the same molds in the three models, with some important differences. All boxes have a cylindrical shape and construction in lead-gray plastic, a discreet and small base that keeps the boxes on the surface and is not visible on the table. The side diaphragms are positioned not at a right angle, but forming a kind of trapezoid and have a circular strip that is backlit on the two larger models. On the front are the holes for the sound outputs and on the rear a large Xboom inscription and the LG logo. At the top are the device controls, with the power buttons, Bluetooth, volume plus and minus, Play / Pause and Sound Boost.

The three models look similar, but obviously differ in size and weight. However, there are differences mainly between PL2 and the others. More compact of the trio, the PL2 was “sacrificed” in two aspects: the side sound radiators do not have illumination and are fixed. One of them also hides the auxiliary cable entries, USB Type C connection, battery indicator and dual speaker button. The base is not always enough to keep it upright, and it can happen that, in a less attentive use, it starts to roll across the surface.

PL5 and PL7 are similar in design, with obvious differences in size, weight and capacity. But the construction of the three is similar and shows that both belong to the same family. In the case of PL5 and PL7, the rear also houses a series of buttons that are hidden: they are the multi and dual modes, light button to turn on the LEDs, reset, USB-C and auxiliary. The PL7 also has a USB-A port, which can be used to charge a smartphone, for example. 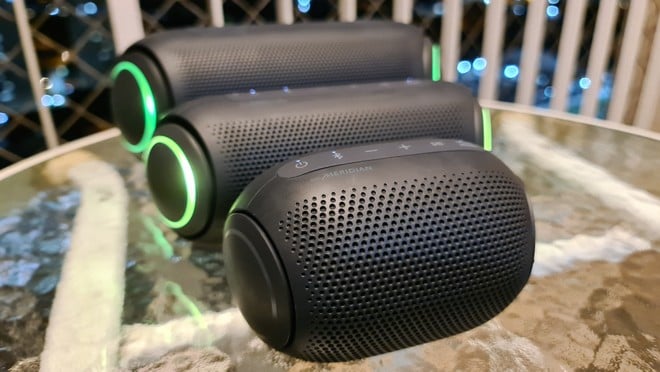 The three models are Bluetooth and have auxiliary output for P2 cables. So, in practice, just turn on the devices, touch the dedicated button and pause them with the cell phone for the magic to happen, right? Yes, but if you want to have access to all the available resources, you can access an application, the LG Xboom, available for Android and iOS.

The use of the Xboom application is optional and has its advantages, such as having a module for playing tracks that are on the device, controlling the lighting of the two boxes and also an easier connection between the PL2 models or the multi mode with the PL5 and PL7, but your only equalization option is to activate the sound boost.

If the application is not fundamental in your user experience, just pair your cell phone or any other Bluetooth device and the box and enjoy. 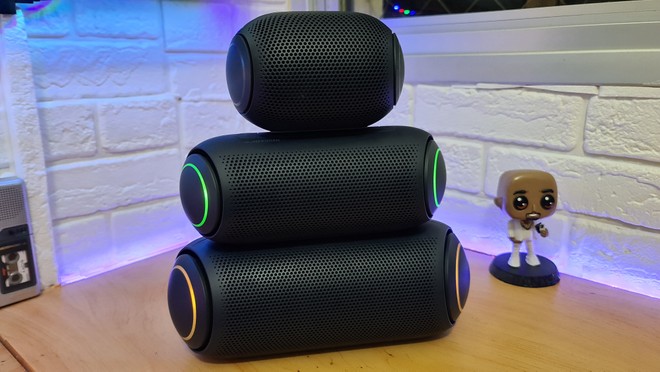 It’s time for a little disappointment with PL2. It does not have multi mode, only dual mode, and that means that it communicates only with another PL2. And this is where we see that PL2’s proposal is different from the others, despite being from the same family. It is compact, but it is the most limited of the three.

The PL5 and PL7 models talk to each other and, although it is possible to pair them with the buttons, the process is not as intuitive, and our recommendation is to communicate between them from the LG Xboom application, and a little patience if you are an iPhone user.

We tested the two larger models working together, and the experience is really excellent for audio, and even better when used with the sound boost on. It may not be enough for a party with hundreds of people, when allowed, but it will do a great job at a pool party with friends. Speaking of swimming pools, the three models have IPX5 protection, which means that they can get wet, but should not be used in the water.

It is worth mentioning that the line has a built-in microphone and, when pressing and holding the Play / Pause button, it activates Google Assistant or the one you want (Alexa or Bixby, in the case of Samsung phones) 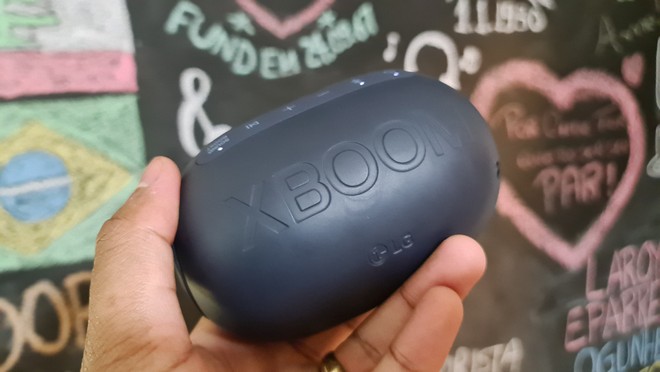 LG’s three speakers are signed by Meridian, a British pioneer and world leader in high-resolution audio, and that makes the difference, thanks to DSP technology (acronym for digital signal processing, which allows complete control over the signal) audio). The vocals are clear and the sound has no apparent flaws in any of the models, even the most basic ones. But there are differences between them.

Starting with PL2, the audio is full-bodied, more focused on midrange, but this is resolved with the sound boost that, unlike models from other brands (such as Wonderboom 2, tested here), delivers more bass when triggered. The sound is engaging and strong for its size, remembering that it is the most compact of the three. There are no distortions at maximum volume and, for family fun or as a sound output from a computer, it is enough. As the side radiators do not work here, they are only part of the design, it is easy to muffle the sound with one hand.

The PL5, while not as big as its older sister, delivers bold audio and, in terms of volume, the experience is similar to that of the PL7. It also favors midfielders, but its greater length and diaphragms give the feeling of greater immersion, which is more than enough, for example, for a meeting with friends – obviously respecting social isolation – or a family party with relatives. Here the sound boost sacrifices the bass in exchange for a more balanced and loud sound, the opposite of its smaller sister. At maximum volume there is no distortion, and the sound is pleasant to hear alone even at the minimum volume.

The largest model, the PL7, is for those who want the most extreme sound experience. In volume, it is not so different from the PL5, but its size allows an even fuller and more immersive sound. The sound boost delivers more volume, but the bass remains almost intact. Its sound is so powerful that it can be used as an auxiliary for television – as was the case in most of the tests done here -, and it replaces basic models and even soundbar intermediaries.

For LG TV owners, it even offers Bluetooth Surround technology, as well as the PL5 model. The maximum volume is so high that, in apartments, it is difficult to play any music without disturbing neighbors. 70% of the volume is more than enough for everyday activities. 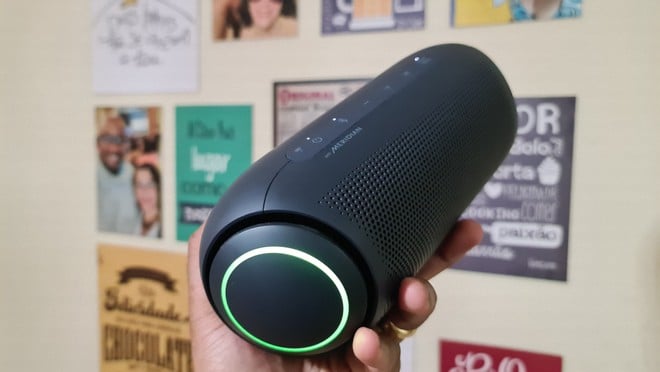 Here it is worth a separate chapter. The three models are great in terms of battery capacity. LG promises 10 hours of sound on the PL2, 18 hours on the PL5 and up to 24 hours on the PL7. We tested the first two models as an auxiliary sound output from the computer in a whole day of home use, editing videos listening to different audios and music during the entire working day, and we were unable to drain the battery of any of them.

In the case of PL7, we used it for a whole day of the weekend as a TV helper, watching lives and series on streaming services and, even with her 30% initially, she was able to endure almost ten hours on without having to go to the plug. Luckily, the three models have USB-C outputs, and can use the same cell phone cables. It also allows you to charge your phone by having a USB-A output. 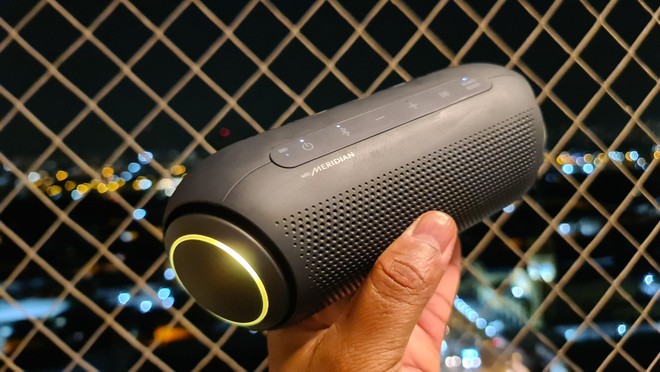 The Xboom Go line has three models that, although they look alike, have different proposals. The smallest is the most accessible, but limited, although it delivers great sound, which is its original proposal. Its limitations, however, are accessories, and for everyday use, it delivers great sound. Its bigger sister, the PL5, seems to be the most balanced of the three, because it provides great sound, excellent battery life and sound with volume similar to that of the superior model, although not as full-bodied. The PL7 is the most advanced, with impressive battery life and the most immersive sound in the line.

The Meridian signature sound quality impressed on the three models, and even the smallest of the three is a good competitor in the most affordable price range, while the largest, heaviest works as an excellent helper even for televisions, but its price can be a discouraging factor. Therefore, our recommendation here is the PL5, which has the main attributes of the PL7 and is light and portable.

The portable speaker market is very balanced, and brands like Ultimate Ears, JBL, Harman and Sony present competitive models, but LG has managed to deliver a respectful line with the Xboom Go family.

PL2 has fake side diaphragms

Lights are only decorative, and do not exist in PL2

PL2 does not have multi mode

The registered patent looks like Galaxy Z Fold 2 with its own space for the S Pen, which works even on the part of...
Read more
Tech news

Anatel changes IoT chips to a category that pays less taxes; MVNOs may use more than one operator M2M chips are very common in...
Read more
Tech news

After announcing a tool for companies, WhatsApp works to warn about conversations that can be accessed by third parties WhatsApp is working to report on...
Read more
Load more

Brazilian among dead in attack on Nice basilica

Brazilian is one of the victims of the attack on the...

Back to school: CS Kagwe and CS Magoha hold meeting to...

Recently, there has been a significant increase in the number of positive Covid-19 cases. Despite this development, the Ministry of Education and the Ministry...
Read more

Another teacher succumbs to Covid-19, KUPPET calls for schools closure

A high school teacher succumbed to Covid-19 complications while receiving treatment at a Nakuru hospital. This is the second teacher to succumb to the...
Read more

Moses Kuria reveals why Uhuru is pushing Ruto to oppose the...

Kenya responds to reports of interfering with Tanzania elections

The government of Kenya has responded to reports that it has interfered with the Tanzanian elections. According to an unverified report that has gone viral,...
Read more