An explosion in Beirut, Lebanon has killed at least 100 people, according to the Associated Press.

Those who felt the blast said that it had a magnitude of an earthquake. Indeed, videos of the blast are chilling.

The shockwave from the devastating blast spread across the suburbs in Beirut, causing large-scale destruction in areas far from the epicentre of the blast.

“It is a catastrophe, I’ve never seen something like that.”

Lebanon is in a state of emergency following a massive explosion in Beirut that killed at least 100 people and injured thousands.

Streets and homes were littered with shattered glass and debris, walls gaping with large holes, as some houses fell completely. 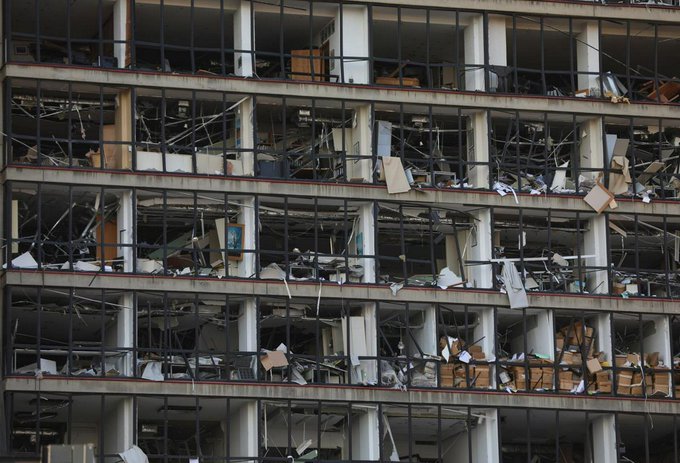 Shattered buildings in Beirut after the blast. Photo – courtesy

Authorities believe that the death toll will likely rise even further as they comb through the rabble.

Possible cause of the explosion

Bomb experts have stated that the blast was a result of more than 2,700 tons of ammonium nitrate. The chemical is commonly used in the making of explosions and bombs.

However, they are yet to establish what may have led to the chemicals blowing up.

“There are many people missing until now. People are asking the emergency department about their loved ones and it is difficult to search at night because there is no electricity.”

He called the Beirut situation a real catastrophe that needs time to assess the extent of the damages.

Magnitude of the blast

Medical staff took to treating the injured at the parking area of Geitawi Hospital after the city’s hospitals became fully occupied.

As of this morning, the city fire department had managed to contain most of the fire, with the task now being on finding those missing.

The true magnitude of the blast continues to unravel. People who experienced it continue to share images and stories of the shockwaves that rippled throughout the city.

Beirut is a city of 5.2 million people, and to each of the residents, the blast was close to an apocalypse.

Accelerating COVID-19 infections has seen the world confirmed cases pass 62 million as the United States attempts to halt a surge. While news of vaccine...
Read more

The US sees highest daily deaths in six months, daily cases near 200,000

The COVID-19 situation in the United States of America (US) is getting worse after the country reported its highest death in months. The surge has...
Read more

An American businessman has been put on the spot for reportedly swindling investors Sh800 million in a fake water project in Kenya. The US market...
Read more
Load more

Celebrated musician Bahati is slowly rekindling his relationship with his ex and baby mama Yvette Obura after rumours of his break up with his...
Read more

Fortnite will make Galactus event this Tuesday and may have exclusive...

Galactus comes to Fortnite on this December 1st, Tuesday, in an event that takes place within the game at 18h, Brasília time. ...
Read more

300 kg man is removed from home by crane in France

Twists and turns match between Borussia Mönchengladbach and Inter Milan. The indoor club have won the right to play a ticket for the...
Read more

The photographer and friends claim they were in the Utah desert when they saw men removing the monolith from the...
Read more

Sculpture in the shape of a penis that disappeared from a mountain in Bavaria, Germany Image: Reproduction / Instagram /...
Read more