Considering he is only 26, it is quite intriguing that Eric Thongori knows so much about the history of cars, dating back to...

As the country moves to the tail end of President Uhuru Kenyatta's regime, hits and misses of the policy directives, the Third Medium...

Dr Eddie Mairura: ‘Sometimes I went for 30 hours without sleep’

My biggest gift for you is Ruto, Mvurya tells Kwale residents

Rolls of bhang stuffed in a sack. Police seized 10 sacks of bhang and managed to arrest one suspect in Webuye Town. Interior Cabinet...

Residents of Nkabune village in Meru county pour illicit brews impounded at the homestead of illicit brewer after they evicted her and vandalized his...

Tanzania President Samia Suluhu Hassan. AFP PHOTO Tanzania has doubled the cost of export permits by 93 percent, a move likely to open another...

United and Barça close to agreement for Frenkie de Jong

Manchester United and Erik ten Hag are expected to get their first signing soon. After several weeks of negotiations, and an initial...

Climate-smart agriculture is key to mitigating the negative effects of global warming. PHOTO | SHUTTERSTOCK For many years, large-scale and small-scale farmers in the...

Why Nakuru is most preferred trade hub

Some of the new buildings that have come up in Nakuru's central business district.   Before independence, Nakuru was the country’s economic and agricultural hub....

Nine years after his arrival in England, Fernandinho is preparing to leave Manchester City. At the end of the contract on June...

Nairobi Catholic Archbishop Philip Anyolo is fed on a cake by a worshiper at Consolata Catholic Shrines during the Church's Family Feast Day on...

Student at Maasai Mara University. FILE PHOTO | NMG The Public Service Commission has been sued after it advertised the position of one of...
Load more

Dr Eddie Mairura: ‘Sometimes I went for 30 hours without sleep’

United and Barça close to agreement for Frenkie de Jong

A US congressman proposed sending “to the most affected countries, such as India and Argentina” the remaining doses of the AstraZeneca vaccine

Raja Krishnamoorthi is one of 12 members of the US Congressional Coronavirus Crisis Subcommittee. He asked the current administration to release the millions of doses that his country has in reserve. “When there are people who desperately need them, we cannot leave them stored in a warehouse,” he said.

While the vaccination plan in the United States is progressing at a good pace, a Democratic congressman from that country published a statement in which asked President Joe Biden that the surplus of millions of AstraZeneca vaccines be distributed to countries where the coronavirus is hitting the hardest, “including India, Argentina and others.”

The Indian-American Raja Krishnamoorthi, representative of the eighth district of Illinois in Congress, published on his website and on social networks the statement in which he asks a gesture of humanity towards countries where the covid-19 pandemic continues to grow and where there is a shortage of vaccines.

“At the moment, We have nearly 40 million doses of AstraZeneca vaccine in stock in the United States. They are reserves that we are not using and that we have already opened to combat Covid-19 in Mexico and Canada. To stop the spread of this virus internationally and protect public health and our international economy, we need to distribute these vaccines right now, “says the statement from the US legislator.

The statement presented on Saturday by the Indian-American deputy

“I respectfully but firmly call on the Biden Administration to release millions of doses of AstraZeneca to the countries most affected by the spread of Covid-19, including India, Argentina. and potentially others ”, he concluded.

The statement was posted on all social media platforms on Saturday afternoon. On Twitter, the congressman accompanied the text with the phrase: “We need to release the deprecated storage of AstraZeneca vaccines right now. In India alone, almost 350 thousand cases of covid-19 were reported today. When people in India and elsewhere desperately need help, we cannot leave vaccines stored in a warehouse. We have to take them to the places where lives can be saved ”.

Krishnamoorthi, who was born in New Delhi and moved to the United States with his parents at three months of age, plays a leading role in the fight against Coronavirus within Congress.

Since January, is one of the 12 members of the Select Subcommittee on the Coronavirus Crisis in Congress, along with six other Democratic and five Republican representatives.

Presentation by Raja Krishnamoorthi, in his role as a member of the Subcommittee on the Coronavirus Crisis, in the Washington Capitol (Susan Walsh / REUTERS)

Precisely, throughout the almost year and a half of the covid-19 pandemic in the world, the representative of Illinois played a leading role in sponsoring and developing key policies to address the pandemic.

In March 2020 he was one of the main promoters of the call CARES Act, an economic stimulus of 2.2 trillion dollars destined to alleviate the economic crisis due to the pandemic, which was later signed into law by former President Donald Trump.

In addition, it promoted various investigations to analyze the response of the United States Government to the pandemic during 2020. It also commanded a study on the irregularities of the Drug and Drug Administration (FDA) in the regulation of serological antibody tests during the early phase of the pandemic.

The vaccine known worldwide as AstraZeneca was developed in parallel by the laboratory of the same name and specialists from the University of Oxford, in the United Kingdom.

During the last week, the Ministry of Health of Argentina started the distribution process Throughout different provinces, 800 thousand of the total 1,082,400 doses of the AstraZeneca vaccine that arrived in the country. The same were made in South Korea and they arrived at Ezeiza airport from Amsterdam through the COVAX mechanism. These doses were distributed between the City of Buenos Aires and most of the provinces, with the exception of Chubut. 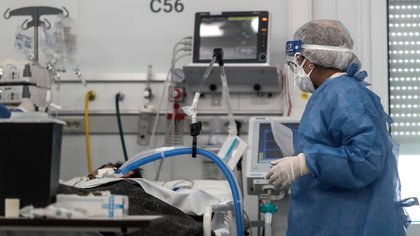 At the AMBA, the level of occupation of intensive care beds is of concern (EFE / Juan Ignacio Roncoroni)

Krishnamoorthi’s statement came to light just at a time when India became one of the fastest growing points in the wave of infections and when its outlook is desperate: on Friday it reported 346,786 cases in 24 hours, which was a new world record for infections in one day. What’s more, surpassed Brazil as the Nation with the highest number of daily infections per million inhabitants (271) Y the average of daily deaths is 2,000 for a week.

Argentina, for its part, suffers a rapid increase in serious cases in what is presented as the beginning of the second wave. Intensive care bed occupancy increased 40% since March 15 and the situation is especially critical in the AMBA, where an average of 78% occupancy of ICU beds is recorded.

Fidel Odinga's widow speaking during her husband's funeral in...

As the country moves to the tail end...

Fidel Odinga's widow speaking during her husband's funeral in...

As the country moves to the tail end...