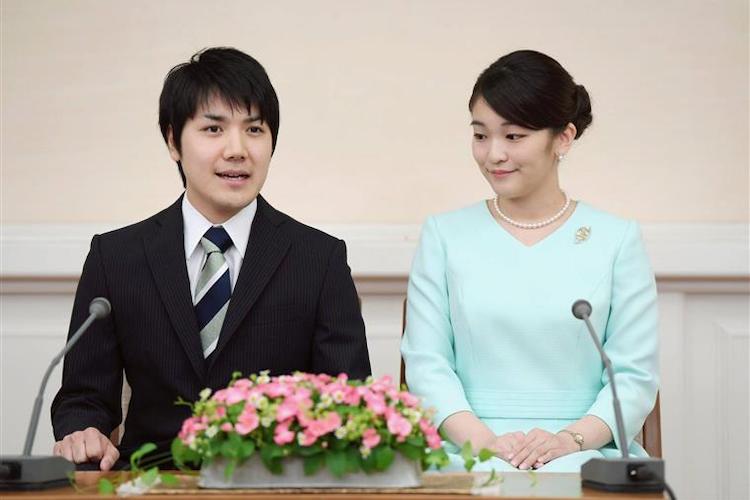 The Japanese monarch will leave real life and live in the US with her husband, a plebeian lawyer she met in 2012 at the University. The press has been scrutinizing the life of Komuro Kei, whom they consider an unsuitable partner for a Princess, and the couple’s story has been compared to that of Meghan and Harry.

It sounds like a story from a fairy tale, but it’s in real life. Against everything and everyone, Princess Mako, aged 30, even changed rings with the plebeian lawyer Kei Komuro this Tuesday, after having announced the controversial engagement in 2017.

The wedding was supposed to have taken place in 2018, but had to be postponed after the Japanese press revealed that Komuro’s mother was involved in a small financial scandal over a loan she owed to her ex-fiancé.

Komuro was disillusioned about how his mother’s problems had taken the lead in the wedding preparations. As for his fiancée, the lawyer was direct: “I love Mako-san. And I want to spend my life with the person I love”. The groom also guaranteed that he will do “everything possible” to resolve the financial dispute.

The truth is that since the beginning, the engagement has caused controversy in the most conservative social strata in Japan. The frenzy of the tabloids is based on the choice of a commoner son of a single mother and the criticism rose even more in tone after Kei Komuro arrived in the country on October 26th with the hair in a ponytail.

The press posted pictures of the 30-year-old lawyer’s hair from all angles and social media commented on the princess’s groom’s hairstyle, with some expressing their support while others considered it inappropriate for a royal bride’s partner.

Although not controversial in the West, Komuro’s ponytail signals that he is not willing to conform to social expectations associated with its status.

“If he were a singer or an artist, it would be normal, but people think he doesn’t look like a lawyer and that doesn’t look appropriate for a person who is going to marry a royal woman,” explains Hitomi Tonomura, professor of gender studies at the University of Michigan, to CNN.

The groom cut his hair before the wedding, but that was his only offense in the eyes of the press. Although most royal weddings are grand ceremonies marked by pomp and circumstance, the couple chose to have a simple press conference after signing the papers they paid for themselves, after accusations that they shouldn’t waste public funds.

The Princess’ father, Prince Akishino, is also reportedly opposed to a traditional marriage due to the division in Japanese society over marriage. Television footage showed the bride leaving the house wearing a light blue dress and carrying a bunch of flowers and bowing to her parents.

The princess will abandon real life and also to renounce the traditional financial support given by the state to the women of the Japanese Imperial Family who marry and leave the institution, in the amount of more than 1 million euros, after having grown up within the imperial family in the 1990s.

Even as a child, Mako won over the Japanese audience with her delicate manner that fit like a glove into the mystique of royalty. But the usually perfect Mako has already begun to deviate from expectations for a Princess when in 2012 she chose to study art at Tokyo International Christian University rather than Gakushuin University, popular among Japanese elites.

It was at this University that the niece of Emperor Naruhito met her now husband, who came from a modest family and was raised by a single mother, having lost his father and grandparents in childhood.

The couple announced their engagement in 2017, with the Princess saying she had fallen in love with the “bright smiles like the sun” of the groom and that Komuro was “sincere, determined and hardworking with a big heart”.

Everything was going well until the tabloids began to dissect Komuro’s life and discovered her mother’s disagreement with her former fiance. Despite attempts to clarify what had happened, many media outlets began to portray the lawyer as a untrustworthy self-interested.

The intrusion of the press even led to the Princess beginning to suffer from post-traumatic stress disorder, as revealed by the Royal House. But Mako was determined to marry, describing the decision as “a necessary choice,” despite acknowledging that the union had many opponents and critics.

“I’ve been scared and felt sadness and pain when rumors on one side only become baseless news,” he said. Komuro Kei argued that “incorrect information was treated as if it were true” and lamented that “Mako-san had problems with her physical and mental health as a result of defamatory comments”.

Japan’s succession laws state that Mako could never be Emperor, as this position is for men only. If the Princess has a child, he will be raised outside the royal family and will not be able to ascend to the throne either.

The story of the Japanese couple has already motivated comparisons with the Dukes of Sussex. In 2018, Prince Harry of England married actress Meghan Markle, who is not only a commoner, but also divorced and biracial, not fitting the traditional profile of a bride of the UK monarchy.

The couple also left real life in January 2020, claiming the press intrusion had become unbearable, and now live in California. The Dukes of Sussex interview with Oprah Winfrey this year has caused controversy due to the couple’s accusations that the royal family will have denied to give mental support to Meghan and that a senior member has commented on the skin tone of their son Archie.

“I feel disgusted.” Vanessa Bryant fears photographs of her husband and daughter’s bodies will go viral