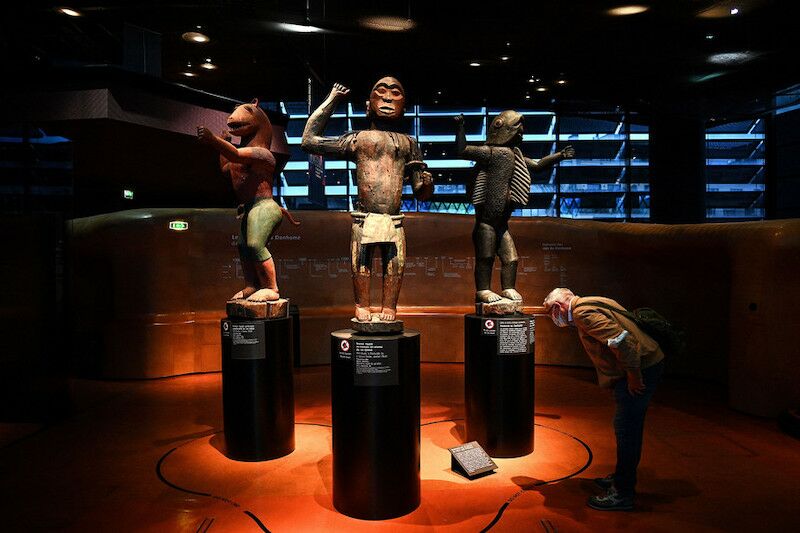 The decision is part of the strategy that Macron announced at the beginning of his mandate to bring France closer to its former colonies in Africa.

The 26 pieces from the colonial era originating in Benin were shown for the last time in France on Tuesday. returned to the original country. The decision shows the tendency of colonizing countries to reassess the legacy of colonialism and to return stolen pieces and works while they dominated the colonized countries, pieces that are still in many museums in the West.

The 26 pieces in question — which include statues, thrones, ceremonial axes, palace doors and portable thrones — were sacked by the French in 1892 during wars with the then reign of Dahomeu and will be on display at the Quai Branly Museum in Paris for just six days, before being shipped to the African country later this month, writes France24.

France approved the return of the pieces in 2020, after considering them public heritage during more than a century. The decision is part of Emmanuel Macron’s strategy to improve relations and France’s image in Africa, especially among young people. Macron also visited the exhibition on Wednesday afternoon.

The Elisha affirms that the French President is committed to the African peoples who suffered from French colonialism and wants them to have the opportunity to appreciate their culture in their countries and not just in museums in Europe. “The decision marks a important step in the creation of a new relationship between France and Africa”, writes the Presidency.

Macron had also announced this month that a drum from Côte d’Ivoire, which is in the same museum, would also be returned. The President’s decisions also prompted some criticism, with some museum directors saying the works are of “universal” interest and opposing their return.

The president of the Quai Branly Museum, Emmanuel Kasarherou, also announced that the institution is carrying out a detailed assessment of the origins of its collection of more than 300,000 artefacts, with the aim of “identifying objects that have been violently removed, without the consent of the owners, as spoils of war or through the coercion of the colonial administration”.

Since his election in 2017, Macron has changed the conversation in French society about the impact of French rule in Africa, ensuring in a speech to students in Burkina Faso that I was going to return the cultural artifacts of the former colonies throughout his term of office.

A report ordered by the French President also concluded that around 90,000 African objects are in French museums, of which 70,000 are in the Quai Branly Museum alone.

Macron has also already described the 26 pieces that will now be returned as “Benin’s pride“but the President of the West African country wants more. Patrice Talon has previously said that he is not “satisfied” with France’s “small steps” and called for the country to go further.

The pieces will be exhibited in various parts of the country, including in a old portuguese bastion in the city of Uida, where the slave trade was recurrent.

Appeals for returns grow in tone

France’s return to Benin is far from coming out of the blue. In recent years, movements have grown in several European countries calling for the return of the cultural legacy to the former colonies, including in Portugal. In a proposal to amend the 2020 State Budget, Joacine Katar Moreira, at the time still a member of Livre, proposed that the heritage of national museums and archives be assessed and that the artefacts be returned to their communities of origin.

The measure was part of a proposal by the Livre that intends to implement a program of “decolonization of culture” and a “national strategy for the decolonization of knowledge”, being an opportunity for Portugal “to choose to be part of a movement that brings together the search for historical justice, while responding to the needs and challenges of the present time”.

Several of the world’s biggest museums, such as the Louvre, the Getty, the British Museum or the Humboldt Forum, have also been pressured to return the heritage.

Meanwhile, the Metropolitan Museum in New York, which is one of the largest and best known in the world, has announced that it will analyze the history of 45 objects from Cambodia and that comprise two large collections. Produced during the Khmer empire between the 9th and 15th centuries, it is speculated that they were stolen during the final decades of the 20th century.

The American museum notes that it was he himself who suggested going ahead with the investigation. “MET has a long and well-documented history of responding to claims concerning works of art, restoring objects when appropriate, being transparent about the provenance of works in the collection, and supporting further investigation by sharing all known information about owners,” the museum said.