The “miracle” ensured the stability of the medieval monarchy 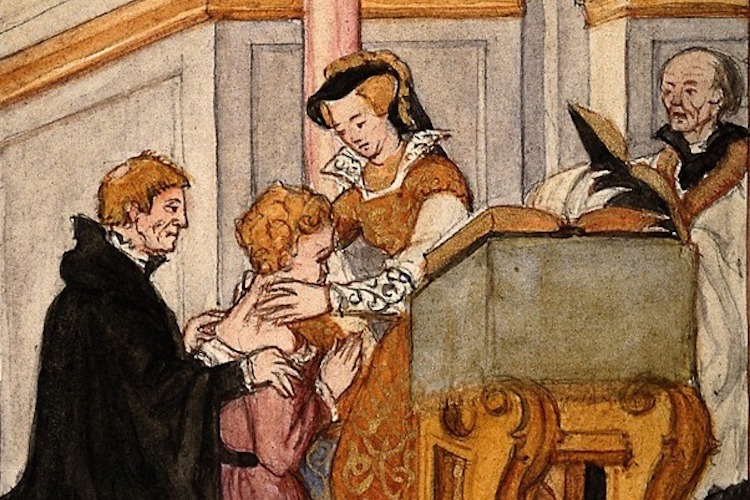 Maria I to exercise the “Real Touch”

Although it became popular during the medieval period, the “Real Touch” – the belief that a monarch could cure a subject just by touching his hands – began its journey during the Roman Empire.

This was, for centuries, one of the characteristics that the various monarchies around the world had. the kings and queens were regarded as “God’s chosen” and, as such, direct contact with monarchs could have divine proportions – in the imagination of the population, it could even have the potential to cure the most infamous diseases.

In many monarchies, to receive the divine right, it was believed that the king’s soul had been offered to God at his coronation. This meant that every time the king wore his crown, he would be blessed with divine powers.

In medieval times, the population believed that, with God’s blessing, the king would rule fairly and use your powers for the benefit of your subjects.

Many monarchs, writes the Ancient Origins, were seen as the incarnation of God and built a reputation of possessors of supernatural abilities. One of these powers became known as the “Royal Touch”.

The “Royal Touch” also known as the “King’s Touch” was a blessing, similar to the laying on of hands. It was widely practiced by English and French monarchs throughout the Middle Ages. At the time, people from any social class could request a meeting with the king with the objective of receiving the much desired “Real Touch”.

It was believed that the king, because he supposedly had a direct link with God, had healing powers, and that touch had the ability to cure diseases for which medicine had no answer. In this sense, many people who were diagnosed with serious illnesses, asked the king to touch them, in order to recover.

The request for the “Real Touch” began to become common among people who suffered from scrofula – a chronic, hereditary disease of the lymph glands in which fluids change, forming tumors that can ulcerate. There were many subjects who believed that the “Royal Touch” could cure the scrofula, which was also known as “King’s evil”.

However, this was not the only disease that the medieval population believed the king could cure. Fever, rheumatism, blindness and goiter, were also on the wish list for the monarch.

The belief that kings had divine healing powers was well known in the Western world. In some European countries, monarchs used their potential healing powers as a form of political propaganda. That is, the king could claim manifest evidence of his divine powers while painting a compassionate, benevolent, and selfless image of himself in front of his subjects. For the English and French monarchies, this was a useful way to maintain social order, remember the Ancient Origins.

This narrative was passed outside the walls of the palaces in a very structured way. People believed that the king had healing powers, as the king himself was rarely seen sick.

The king was always healthy and capable, or so he appeared in the carefully painted portraits. This little trick, made the population think that the monarch himself automatically benefited from the “Royal Touch”.

At a time when the monarchical institution was much less stable than in subsequent centuries, with dynasties often ascending to the throne following a series of battles, this was a way of credible the power of kings.

England and France were pioneers

One of the first historical accounts of the “Real Touch” dates back to the 11th century in England, where the Anglo-Saxon King Edward the Confessor, started the practice. The monarch was known to cure the scrofula just by touching the patient’s hands – and by placing a mark on the patient’s neck.

There were many stories that emerged where it was heard that the patients had stayed instantly cured after contact with the re.i.

In this way, the “Toque do Rei” came to be seen with even more credibility among the population. It was considered “a miracle” and it ended up significantly improving King Edward’s authority. But those who think that the cure was the result of a work of charity make a mistake. In fact, the cured sick were encouraged to make a donation to the royal coffers after receiving “The Touch”.

The “miraculous tradition” did not stop there and there were several kings of England who followed in Edward’s footsteps.

Mary I, daughter of King Henry VIII and his first wife, Catherine of Aragon, was one of the English queens to exercise the “Real Touch”. This feature was important in her reign, for by exercising the “power of healing”, Mary was able to demonstrate that a female monarch could conduct the ceremonies previously prescribed only for a male monarch.

In England, the “Royal Touch” ceremony continued until the reign of Charles II’s niece, Queen Anne (who died in 1714). With his descendantless death, the Stuart dynasty came to an end. Since the rise of the House of Hanover, the tradition has never been resumed.

In France, the tradition went even further. The “Touch of the King” was considered significantly effective in the country. O King Louis XIV it wasn’t enough for orders and on Easter Sunday, the story goes, it touched 1,600 people. This ritual has made it a tradition to exercise the “Royal Touch” on certain holy days.