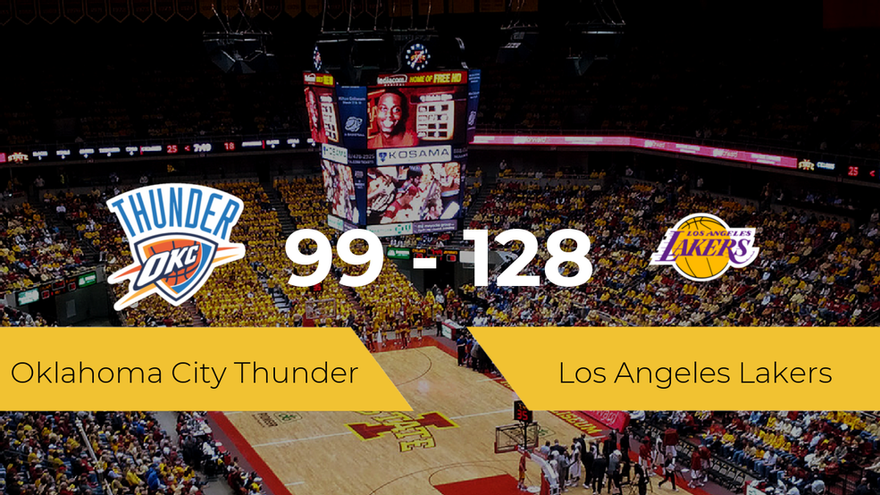 Los angeles lakers managed to win Oklahoma city thunder away by 99-128 in a new NBA day. Locals come from losing home with San antonio spurs 102-112 and after this result they added a streak of three defeats in their last five games. For their part, the visitors won away from home against Houston Rockets by 100-117, so after the game they completed a streak of five wins in a row. With this result, Los angeles lakers accumulates 10 victories in 13 games played in the competition, while Oklahoma city thunder it remains with five victories in 11 disputed parties. Check the NBA standings after the game.

During the first quarter, the Los Angeles Lakers players were the main protagonists, in fact, they achieved a 13-2 partial in this quarter and went on to win by 12 points (4-16) until finishing with a result of 21-30. . Later, during the second quarter the players of the visiting team distanced themselves in the light, in fact, they got another 16-0 run and had a maximum difference of 24 points (32-56) during the quarter, which ended with a partial result. from 25-28. After this, the rivals came to rest with a 46-58 on the scoreboard.

The next match of Oklahoma city thunder will be against Chicago Bulls at Chesapeake Energy Arena, while the next meeting of Los angeles lakers will be against New Orleans Pelicans at Staples Center. Check the full NBA schedule.