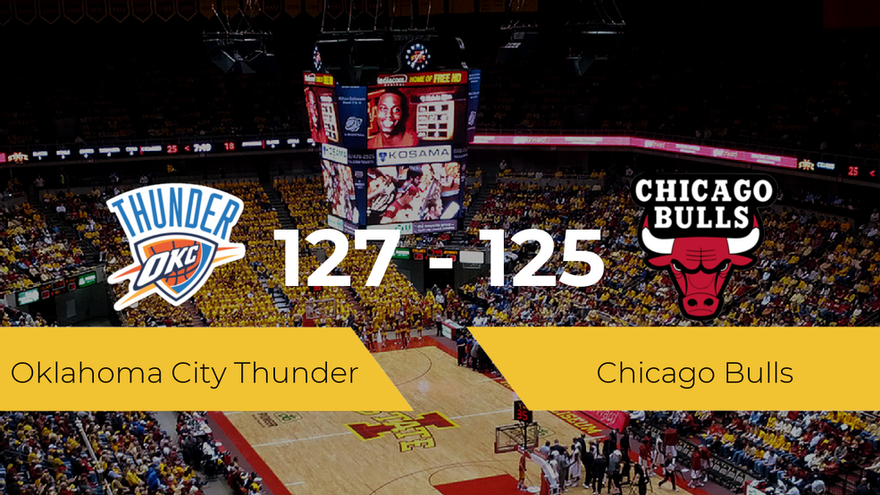 Oklahoma city thunder managed to win at home against Chicago Bulls by 127-125 on a new NBA day. The locals come from suffering a defeat at home with Los angeles lakers by 99-128, while the visitors also lost away with LA Clippers by 130-127, so after the match they completed a streak of five straight losses. With this result, Oklahoma city thunder accumulates six victories in 12 games played in the NBA, while Chicago Bulls he remains with four victories in 12 games played. Check the NBA standings after the duel.

During the first quarter Chicago Bulls he was the main dominator, he made the maximum difference (eight8 points) at the end of the quarter until finishing with a 22-30. After this, in the second quarter the players of Chicago Bulls They increased their difference, in fact, they got a partial 10-2 during the quarter and went on to win by 19 points (41-60) during the quarter, which ended with a partial result of 28-38. After this, the teams reached the break with a 50-68 in the light.

Over the course of the third quarter Oklahoma city thunder closed the gap on the scoreboard, in fact, the team achieved a 15-2 partial during this quarter until it concluded with a 37-27 partial result and an 87-95 overall. Finally, during the last quarter the local team players managed to tie the game through a comeback, in fact, they got a 12-2 run and reduced the difference to minimum values ​​at the end of the quarter, and the quarter ended with a partial result of 31-23. Finally, the game came to the end of the quarter with a draw at 118-118 between both teams, so the game needed an extension to determine the winner.

During the match, Oklahoma city thunder took the victory thanks to 33 points, 10 assists and five rebounds from Shai Gilgeous-Alexander and the 21 points and eight rebounds of Luguentz Dort. The 35 points, six assists and seven rebounds of Zach Lavine and the 22 points, seven assists and nine rebounds of Coby white they were not enough for Chicago Bulls could win the game.

After achieving victory, in the next duel Oklahoma city thunder will face Philadelphia 76ers at Chesapeake Energy Arena. For his part, the next adversary of Chicago Bulls be Dallas mavericks, with which he will face in the American Airlines Center. Follow the NBA schedule in full.